This week's headline piece takes you on a wonderful trip down memory lane - especially if you'd read a lot of books when young.

- #SOTD 72: Use the right metrics and norms (Economist article): Do we have a crony capitalism problem? How do we even measure that? The Economist gives us a metric and also compares the number for India with that of the US.

- #SOTD 73: The man who nearly died (Moth Story): Matthew Dicks is a fabulous storyteller - in this open-mic storytelling competition, he shares the story of the day he nearly died. Watch it to see a masterclass in how to control the release of information.

- #SOTD 75: Is the world going nuts (or is it just probability)?:Morgan Housel has a (probable) explanation for why we seem to be seeing so many catastrophes in recent times.

​a. The pleasures of the circulating library by Santosh Desai​

This week I went for a different type of article - this lovely evocative piece on the 'circulating library' by Santosh Desai.

(In case you missed it, I had interviewed Santosh on my podcast a few weeks back) 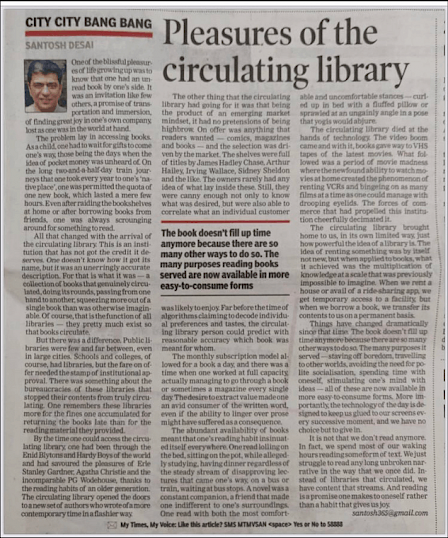 Two storytelling lessons that we can learn from this piece:

Santosh is able to place circulating library's importance in the overall context, by contrasting it with other reading options. For instance he writes:

Public libraries were few and far between, even in large cities. Schools and colleges, of course had libraries, but the fare on offer needed the stamp of institutional approval. There was something about the bureaucracies of these libraries that stopped their contents from truly circulating. One remembers these libraries more for the fines one accumulated for returning the books late rather than for the reading material they provided.

How do you say that "readers get lost in their books"? You show, don't tell:

The abundant availability of books meant that one's reading habit insinuated itself everywhere. One read lolling on the bed, sitting on the pot, while allegedly studying, having dinner despite disapproving lectures that came one's way, on a bus or train, waiting at bus stops. A novel was a constant companion, a friend that made one indifferent to one's surroundings. One read with both the most comfortable and uncomfortable stances - curled up in bed with a fluffed pillow or sprawled in an ungainly angle in a pose that yogis would abjure.

This para also made me smile - twice. Once, remembering my own awkward poses on the sofa when I would be reading Tinkles and Amar Chitra Kathas at my aunt's place in Sion, Mumbai as a young kid.

And two, our son (now 10-years old) who has a habit of reading in some crazy poses...

a. The Age of AI, Crypto, and Web3 with Kevin Roose (on the Prof G Pod with Scott Galloway)

More stuff on AI - this time from the entertaining Prof G Pod.

Scott Galloway belongs to a rare breed of complete business storytellers - people who have demonstrated business expertise, understand data, are able to figure out big-picture patterns and can be highly engaging, entertaining communicators.

In this episode, he discusses the implications of AI developments with Kevin Roose (a technology columnist for the New York Times).

Kevin's response to one question was insightful (and scary).

Scott asked him about the doomsday scenario potential of AI technology - especially the stuff that we see in popular fiction like The Terminator and Matrix movies.

Kevin had a take which was more mundane, but still super-scary.

The essence of his reply: Given the mind-blowing human-like content-generation possibilities with AI technologies like GPT-3 and DALL-E 2 (which will only get better), Kevin gets us to imagine an internet where 99% of content is AI-generated.

In such a situation, how will we humans figure out what is true vs. fake? 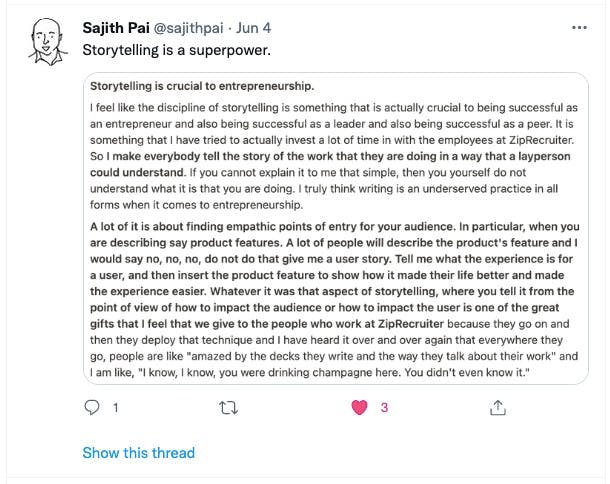 Agree with this one too! Well-crafted presentations are much better than just presenting off of an Excel sheet or Notion table. 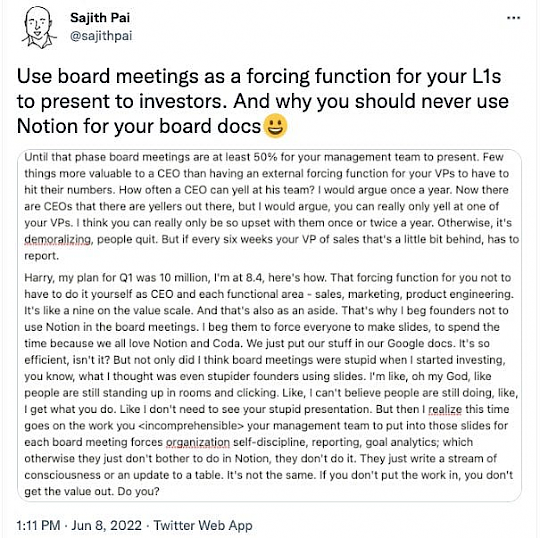 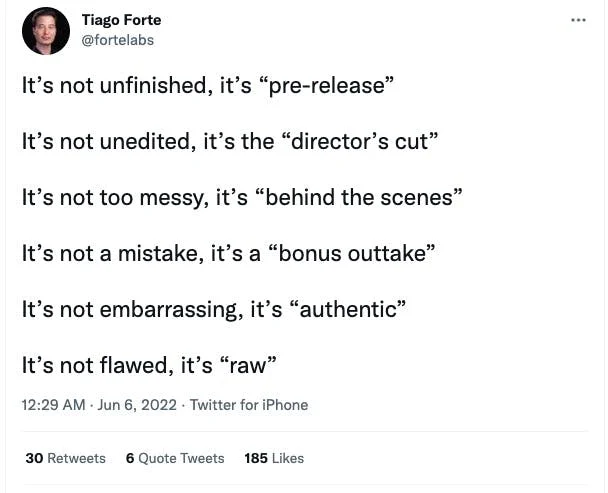 "What an astonishing thing a book is. It’s a flat object made from a tree with flexible parts on which are imprinted lots of funny dark squiggles. But one glance at it and you’re inside the mind of another person, maybe somebody dead for thousands of years. Across the millennia, an author is speaking clearly and silently inside your head, directly to you. Writing is perhaps the greatest of human inventions, binding together people who never knew each other, citizens of distant epochs. Books break the shackles of time. A book is proof that humans are capable of working magic."

More Lee Mack goodness, where he narrates a hilarious incident of having to return a 'shrunken' T-shirt. As they say, 'Why let facts come in the way of a good story?!'

Dark satire on the gun situation in the US. Absurd and heart-rending.

Photo by Anita Jankovic on Unsplash