This week's headline article offers an insightful take on trust. Actually scratch that - today I want you to focus on the "Video" section of the newsletter, which features a set of heartwarming tributes to a legendary performer.

- #SOTD 81: A surprising and emotional Father’s Day Story: I liked this simple personal story of a dad giving up a "better" job because he didn't want to be away from his son for too long.

- #SOTD 84: What’s common between investing and professional sport?: The peerless Morgan Housel starts a post about long-term investing... with an analogy about the practice regimens of professional vs. amateur athletes.

Those were the #SOTDs of last week. ​

​a. Trustless by Scott Galloway​

The recent worldwide meltdown in crypto markets has been brutal. Companies which were promising the moon have come crashing down to earth.

Last week, crypto lending platform Celsius announced it was pausing all withdrawals and transfers between accounts. The company that told us to “unbank yourself” because “banking is broken” broke.

(I loved that last line)

In this piece, Prof G explores an interesting aspect of the underlying premise of crypto: the fact that it was supposed to be trustless.

But the sector’s struggles highlight crypto’s failure to deliver on a core promise: trustlessness. Trustless transactions are crypto’s raison d’etre. In the crypto Magna Carta, the white paper that introduced Bitcoin, Satoshi Nakomoto used the word “trust” thirteen times (in eight pages) and summed up cryptocurrency as “a system for electronic transactions without relying on trust.”

The Prof then steps back and reviews why trust is such a crucial ingredient in our society - and how it is the bedrock on which most of our institutions are made:

Trust is at the heart of all human endeavors. Our species’ superpower is cooperation, and cooperation requires that we trust one another. Trust that we will divide the spoils of the hunt, keep our livestock from one another’s fields, or honor a warranty on a defective product. Modern life exists on a web of trust — from the dairy aisle to the interstate highway, we rely on millions of other people to do their jobs and demonstrate high regard for people they’ll likely never meet. But maintaining all that trust is expensive and cumbersome. I trust drivers to obey speed limits because I’ve paid tax dollars to support highway patrol officers. I trust milk because the FDA inspects dairy plants; and the brand name tells me who to sue if the milk makes me ill.

In the rest of the post, he talks about how one may change the way trust is formed or restored... but one cannot do away with the need for trust.

Middlemen are inevitable. We depend on them to provide more than just trust: security, convenience, customer assistance, and so on. They make user interfaces intuitive and navigable. They help you recover your belongings when you forget your password or your keys. These services provide value, and that comes at a price. Competition and innovation can reduce the cost of trust (stagecoach vs. SWIFT), but they do not eliminate it.

He ends with a few points about the criticality of trust in fostering partnerships, investments and growth... and also building deeper, more meaningful relationships.

(Admittedly, the post felt a bit incomplete to me - it would have been interesting to explore what might be ways in which crypto might incorporate trust-building mechanisms into its frameworks).

​b. 'Were South Africa really unlucky in the 1992 World Cup?' by Sidharth Monga (Cricinfo)​

I discovered this old piece when browsing the Cricinfo website (No, I'm not obsessed with it. Ok, maybe a little bit)

Every cricket nerd of a certain vintage remembers the iconic moment from the 1992 Cricket world cup in Australia, when the semi-final was seemingly robbed from South Africa's grasp.

We remember that pained look on Brian Mcmillan's face - when South Africa's target transformed from 22 runs off 13 balls (doable) to 22 runs off 7 balls (a stretch) to, horror of horrors, 22 runs off 1 ball (impossible) 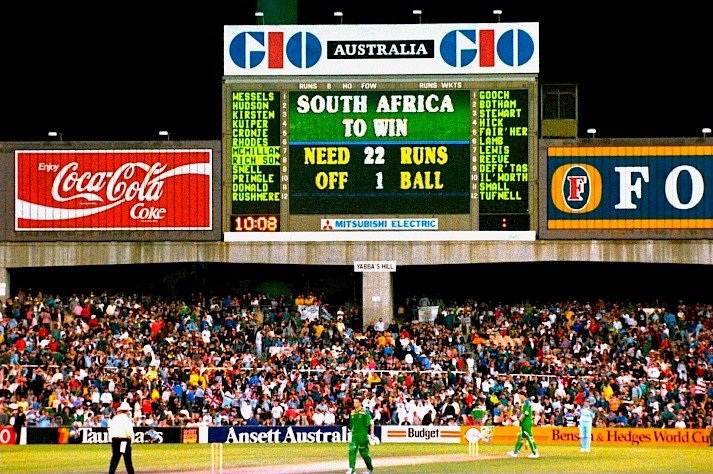 The bizarre computation was because of a faulty rain rule - which has since been modified. But the hearts of many cricket fans still roots for that fighting South African team - who impressed so many people and did so well, despite playing just their first world cup.

Except for Sidharth Monga that is.

Sidharth is among the finest of Cricinfo writers. In this well-argued piece, he opines that the South Africans were not entirely blameless in the match situation that resulted.

He does this by providing context to the rain rule (which was well-known), the previous matches and the specific semi-final match situation. He then shares how South Africa made some choices which were not the best (or the most virtuous)... and which may have played a hand in the final outcome.

Fascinating point of view and a great example of counter-intuitive storytelling.

a. Matt Levine at the Longform Podcast

Matt Levine is the freak (AI?) who writes 4,000+ word pieces every day on financial news and does so in an insightful, engaging and hilarious way.

In this episode, he breaks down some of the thinking that goes into his writing.

One part that I enjoyed during the conversation, was when Matt talks about how he likes providing context to a particular topic by paring it down to its basics. I find that part of his writing very powerful.

Here's an example of that approach in action and here's an edition of #SOTD where I broke down Matt's process.

Agree with this one too - I'm not a fan of book summaries (Blinkist et al). Happy to be proven wrong. 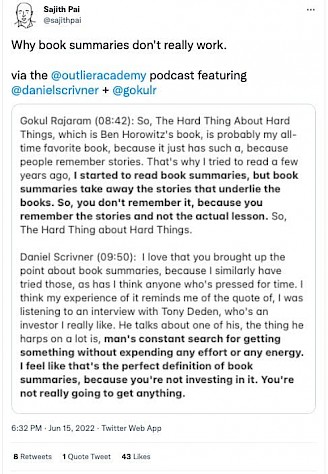 "Travel is fatal to prejudice."

I discovered Jon Stewart quite late - maybe sometime in 2013 or so? But boy, did I make up for lost time by bingeing on any 'Daily Show' clips available on YouTube.

I loved the way he and his team would build the story narrative. Offer historical context. Brilliantly use the principle of contrast. Use dialogue smartly. Add evocative videos/visuals. And have a constant sprinkling of humour throughout the story.

Jon Stewart is an icon - an institution in the US comedy scene. An institution that mentored and offered a launch pad to several future late-show hosts, comics and Hollywood actors who went on to achieve significant success of their own.

In this event, Jon is being honoured with the Mark Twain prize, and all his proteges take the stage and commemorate his work.

It is a constellation of stars celebrating the icon that they look up to and are inspired by.

I especially loved the tributes by Olivia Munn (who starts with a great story), Stephen Colbert, Pete Davidson, John Oliver and Bassem Youssef. And ofcourse the best one was Jon's own acceptance speech.

Once in a while you come across a series of videos that are hilarious yet bring a tear to your eye. That can be inane yet thought-provoking. That are delivered with the perfect pacing (and pausing).

This is one of them.

Completely binge-worthy. You are welcome.