This week our headline article is a tweet thread - a data-story on the changing nature of Hollywood box-office hits.

​a. A tweet thread on Hollywood's box-office hits by Eric Krebs​

Movies are fun (and relatively easy) to research. Each movie is a clear, discrete product. You can categorise them across hundreds of possible aspects. And financial success is easy to measure. Which makes it an analyst's dream.

Freelance writer Eric Krebs uses those factors to his advantage in this eye-opening analysis of how the composition of box-office hits has changed in US.

There are two clear findings that emerge: 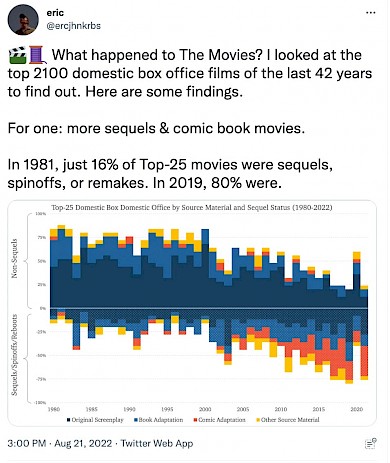 From 16 to 80% - that is a staggering 5X increase in the share of sequels, spinoffs or remakes among the Top-25 movies. 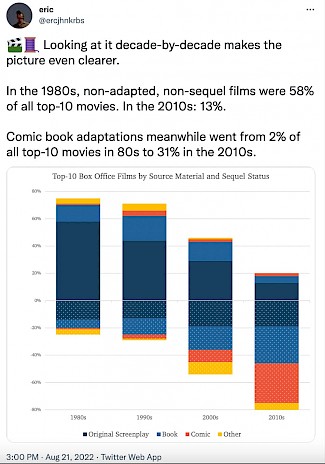 Why is this happening? So here's one of my theories.

All storytelling is a balance between the familiar and the novel. I've written about this before here and also profiled a CRED ad using that framework here. Here's a Christopher Nolan quote from the first piece:

Nolan: “It’s interesting to talk about… the idea of challenging audience expectations… because, that’s the movie I want to see, I don’t want to see a film that I know what it’s going to be … and it’s the balance between familiarity and novelty…. It’s that balance that as moviegoers we always look to…

So, all stories have a balance between familiarity and novelty.

But what does the recent preponderance of sequels in Hollywood indicate?

My (strictly armchair) theory is that in a world of constant novelty, change and disruption, the audience craves for more of the familiar, the tried-and-tested... instead of the new. And so we are seeing that category of movies garnering a higher share of box office success.

A similar trend seems to be happening in music - with most leading songs being dominated by standard, cookie-cutter four-chord songs. And don't even get me started on the abominable tendency among Bollywood music producers to shamelessly remix old song after old song, even if some of them are 1990s drivel.

Anyway, with that rant over, let's look at the other major change - the rise of comic book adaptations.

Comic book stories have been there since the 1950s... and have always offered a rich opportunity to create multi-movie universes with sequels, spinoffs and mega-budget movies.

Why have these become a big deal recently?

The answer is technology. The rise and rise of VFX capability has enabled film-makers to recreate the imagination of the comic book writers in vivid, life-like creations in ways that were unimaginable a few decades back.

Another factor stated by Matt Damon in a recent podcast was this: With the demise of DVDs, the movie industry lost out on a significant revenue source... This has also resulted in the focus on safe, tried-and-tested choices rather then original fare, especially for big budget movies.

Looking ahead: Would this trend last? For the sake of originality and freshness, I hope not for too long!

Also note in the thread the use of:

​b. A Brief History of Portugal by Tomas Pueyo​

​Last week we had profiled the Tomas' article on the fascinating history of Spain... This week he adds one on Portugal.

There are similar themes covered in this piece too - not surprisingly, geography features prominently.

One fascinating puzzle: Why was it Portugal that discovered Brazil and not Spain (which is why to this day, Brazil is the only major country in South America which speak Portuguese, while the rest speak Spanish)? 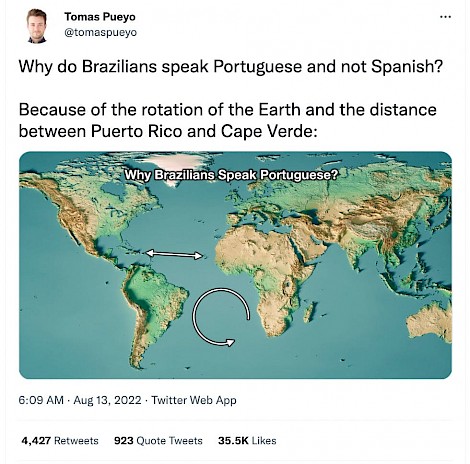 If you are curious, here's the explanation: 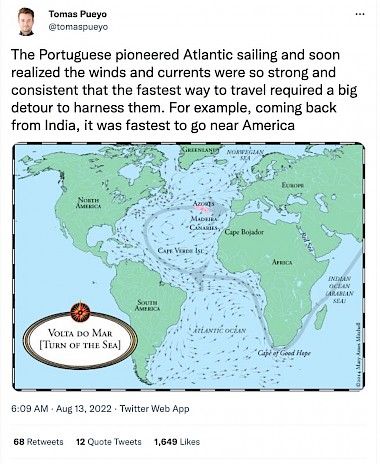 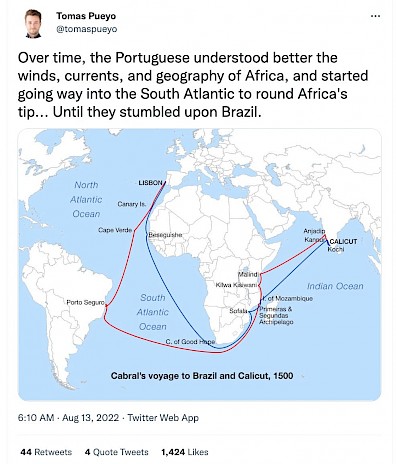 This week I've continued to listen to the wonderful '1947' podcast series.

I've generally found all episodes to be excellent so far (except maybe the one on the Bengal Partition... I found the expert a bit, well, partisan!)

The episode on Gandhi's arrival in India was quite remarkable. It dives into a lot of details - for instance why did Gandhi return to India from South Africa, why did he not return earlier and most importantly, what was the major changes in direction he gave to the freedom movement.

It would have been nice to have Ramachandra Guha as the expert on that episode... But Rajmohan Gandhi is an able chronicler and shares a ton of lesser known details about the Mahatma.

Chris Bakke should get into stand-up comedy 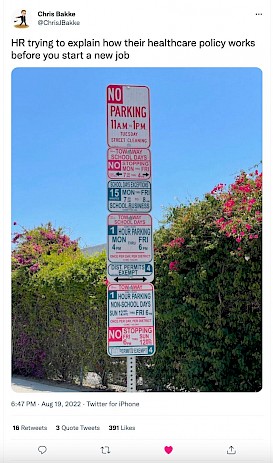 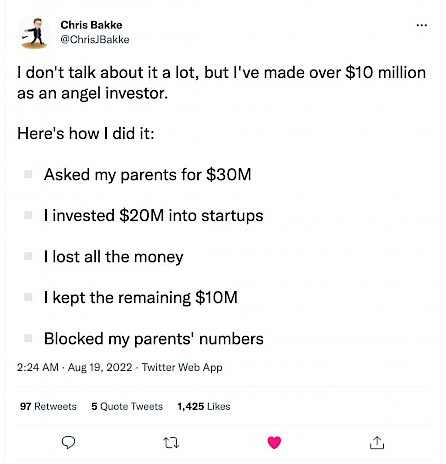 This video of the adorable toddlers cracked me up. 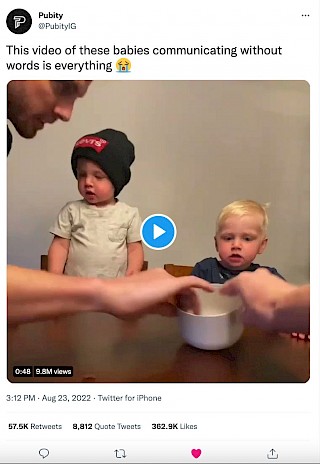 - Raymond Loewy as quoted in this Derek Thompson article​

On 23rd June 2018, 12 boys (aged 11-16) and their football coach (aged 25) had gone exploring a local cave in northern Thailand. The caves were known to get flooded in the monsoon, but the monsoons usually arrived only in July, so the coach thought it was ok to go.

Unfortunately the rains hit earlier that year and that day there was a massive downpour. The cave entrance quickly filled up with water. Unable to exit, the group went deep inside the cave and ended up in a dry ledge - around 2.5 kms from the cave entrance.

Once the parents realised their kids were stuck, the authorities were alerted. Very quickly a team of elite divers (some from the Thai Navy and some international experts who specialised in cave rescues) were assembled at the site.

But it was not easy.

To even access the boys, extremely experienced divers had to endure a treacherous six-hour journey through narrow flooded tunnels, surrounded by jagged rocks and stalactites, battling strong currents along the way.

If getting to the boys was difficult enough, the next part was nigh impossible: figuring out a way to get 13 people with no experience of diving (many of them didn't even know how to swim) back to safety through the narrow water-filled tunnels.

This movie is the gripping story of the how that group of intrepid divers achieved that near-impossible mission.

What struck me was the ingenuity and never-give-up attitude of the divers. They were truly magicians in their craft.

The movie also left me with a strong message: Humankind can seem to be constantly at loggerheads with each other. We have many elements that divide us, that make us fall into us-vs-them struggles.

But, if we are presented with a specific goal, a goal which unites everyone behind a common mission, then we have the ability to focus our immense ingenuity, energy and determination to achieve it. It's as if the goal acts like a magnifying glass which focuses the (otherwise dispersed) power of humanity on a particular spot.

If only we could do this more often without needing a disaster to bring us together!

Photo by Vincentas Liskauskas on Unsplash