This week's main article recommendation, by the incredible Mahima Vashisht, is a stirring ode to that most curious Indian practice - of wives not taking their husband's names.

(Incidentally, no #SOTD Digest this week, since it is on a mid-season break!)

​a. 'He who must not be named' by Mahima Vashist (Womaning in India)​

There are few writers who write about such universally relevant topics (such as gender) with such freshness, clarity, wit and warmth as Mahima.

I've had the pleasure of hosting Mahima on my podcast - catch that conversation in case you haven't yet.

After a longish hiatus, Mahima is back with her delightful newsletter - Womaning in India - in a new avatar.

This post delves into the age-old Indian practice of wives not being able to take their husband's... names!

As always, Mahima peppers the write-up with several vivid real-lfe examples. For instance:

“When I shared the news of my upcoming wedding, all my colleagues - mostly men - congratulated me and asked in the same breath, ‘So now that you will be his wife, what are you going to address Ankit as?’ I was perplexed by the question. No one was posing such a question to Ankit, who incidentally worked in the same firm. But almost everyone I told about the wedding informed me that - now that we were to be a married couple - it was no longer ‘appropriate’ for me to call my partner by his name.”

Of course while the topic is a serious one, Mahima brings her trademark wit (with several hilarious memes).

Her Voldemort analogy is so brutally funny and inspired... Also check out the way Mahima ends the post. :)

Mahima had me in splits at several points in the post. But it is ultimately a read that will make you think deeply about this absurd practice that we have all taken for granted... like many others in the realm of gender.

​b. '​The Single Most Important Thing to Know About Financial Aid: It’s a Sham' by Kevin Carey​

If you have kids who are looking to join a US based college in the near future, you should read this article.

In the piece, the writer chronicles some of the questionable practices that private colleges use, to meet their admission targets

Note how he starts with an individual story:

In early March, a 17-year-old high school senior I’ll call Ethan got a text message from Ursinus College, a small, private liberal arts school located about 45 minutes outside of Philadelphia. It said, “Great news, [Ethan]! Ursinus College has awarded you additional money! Log into your portal to view your updated financial aid award.”

It turns out colleges are just using these incentives to meet their enrolment targets.

Kevin uses the analogy of how airlines manage their ticket booking:

To answer those questions, many colleges hire expensive consulting firms to help them manage a complex process of marketing, admissions, and pricing. The firms design social media campaigns and produce the flood of glossy brochures that pours through the U.S. postal system every year. They take the wealth of detailed financial information that parents are required to disclose on the Free Application for Federal Student Aid, or FAFSA, and feed it into the same kinds of complex algorithms that airlines use to constantly change the price of seats in the months, weeks, and days before a flight.

They also use a probabilistic strategy for deciding whom to admit, based on a combination of how much they think parents are willing to pay and how likely students are to enroll. Because of online systems like the Common App, it’s easy for students to apply to many colleges. At less desired colleges—the safety schools and fourth choices—“yield” rates, meaning the percentage of admitted students who enroll, are often below 20 percent. So they admit 3,000 students to fill a freshman class of 600 and hope that past statistical patterns hold. If too many students enroll, there’s no room in the dorms. Too few, and the college goes broke.

It's a troubling thought. This portion captures the major concerns of the article well:

As DiFeliciantonio wrote: “Wealthy families are more able and less willing to pay for college while the poorer families are more willing and less able.” In other words, parents of means who themselves have finished college are often sophisticated consumers of higher education and are able to drive a hard bargain, whereas lower-income, less-educated parents feel an enormous obligation to help their children move farther up the socioeconomic ladder and blindly trust that colleges have their best financial interests at heart.

Colleges do this because they want and need money. The business of filling up a class has gotten more difficult as the number of new high school graduates continues to recede from the peak millennial years, with further declines expected starting in 2025. Small, private colleges are especially vulnerable, and some have gone bankrupt in recent years.

With college debt accounting for more than $1.7T, and the sector facing the headwinds of online learning programs, these are indeed interesting times for colleges.

a. 'Way to go, Ohio' on Revisionist History (Malcolm Gladwell)

Malcolm Gladwell is back with another season of the stellar Revisionist History podcast. The theme of this season is 'experiments'. In Episode 1 of the season, Gladwell starts by asking leading social scientists about their favourite fantasy experiments.

Episode 2 - this one - recounts the fascinating story of an experiment in the city of Akron, Ohio (US).

In it, an entire city's school board was convinced to add a foreign chemical to an ingredient that all of us consume everyday: salt.

At that time, many people, especially in inland areas, were afflicted by a terrible disease called goiter. An intrepid doctor convinced an entire's city's school board to run an experiment in which some students were given salt fortified with iodine instead of normal salt... and the result was a huge success! The experiment led to the elimination of the disease and a worldwide adoption of iodized salt.

It is a fascinating story of a city agreeing to become guinea pigs in an experiment that may not have seemed like a slam dunk, but eventually resulted in countless lives being saved and improved.

Gladwell ends the story with a devious possibility - what if we manage to create a powder version of the Covid vaccine, and decide to add it to salt? How will the anti-vaxxers respond? :) 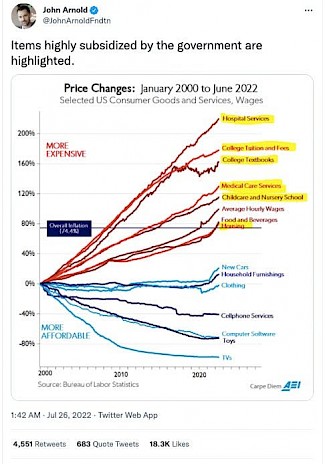 What is more surprising than the steady rise in prices of service-based sectors is the fall/stagnation in manufactured goods.

Here's what I wrote about it: 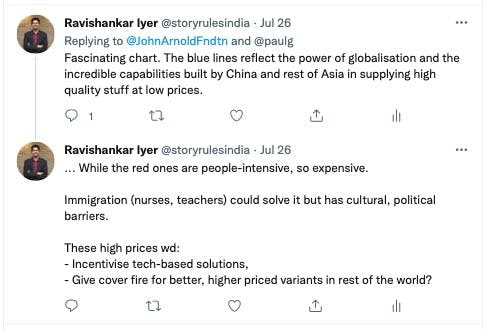 I'm always a sucker for a good relief map - I just loved this representation of India's southern peninsula posted by Raj Bhagat (follow him for some great map related visuals!). Open the link on your laptop/desktop if possible and check out the Palakkad gap... and oh, we have frequently trekked to Tamhini Ghat, which is a stunning place! 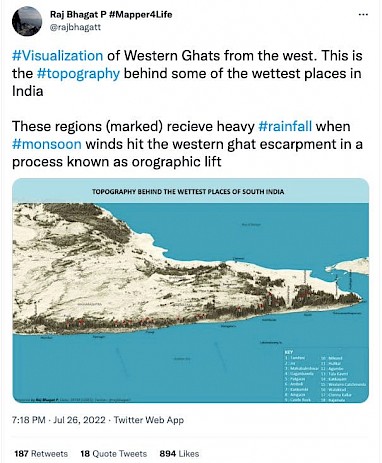 "It's not what you look at that matters; it's what you see"

Video/s of the week

Another Key and Peele goodie. Uff, how they can take such a dark subject like slavery and make it so funny.

Key and Peele play characters who are about to be auctioned off as slaves and are initially angry at the prospect... but increasingly get despondent that no one is choosing them to buy!

The writing is sharp, relentless and witty.

As they say: Comedy = Tragedy + Time

Photo by Thomas Curryer on Unsplash