Steve Jobs, Elon Musk and Yuval Harari have used this storytelling technique – you should too

What if I told you there is a foundational storytelling technique that all successful business storytellers use – one, however, that isn’t noticed by many of us?

I have a name for this secret tool: “Norm-Variance”. Let’s look at some examples.

January 9, 2007 was an epochal day in our times: the day when the first Apple iPhone was announced. Steve Jobs was in his element, mesmerising audiences near and far with his pitch-perfect storytelling.

One sequence that stood out for me in particular, was how he introduces the iPhone itself. Initially he toys with the audience indicating that Apple is launching three devices: a revolutionary mobile phone, a breakthrough internet communicator device and a wide-screen iPod with touch controls. The audience guffaws at the clever visuals and his ‘reveal’ that it is just one device with all these capabilities. 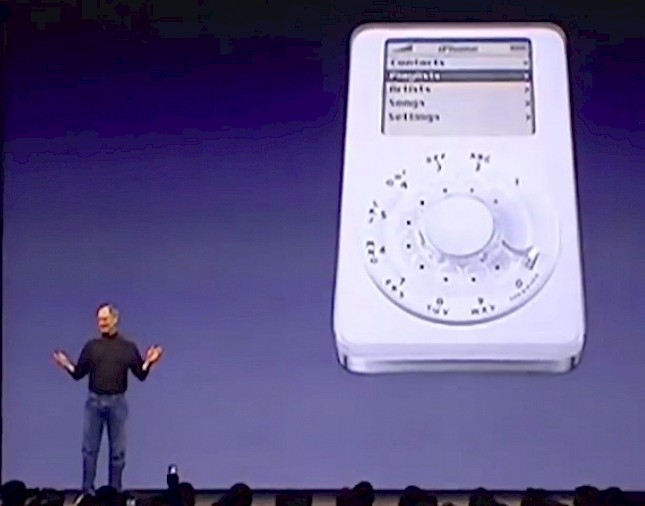 What’s interesting is what happens next. He doesn’t actually show you the real iPhone – no sir, he wants you to understand the existing ‘smartphones’ landscape first. To do that he uses a simple framework – a ‘Business School 101’ graph. Depicting existing ‘smartphones’ on a 2×2 grid, with a ‘smart’ axis and an ‘easy to use’ axis, he clearly indicates how the current options available are clearly sub-optimal. They are either not smart; or are terribly difficult to use. 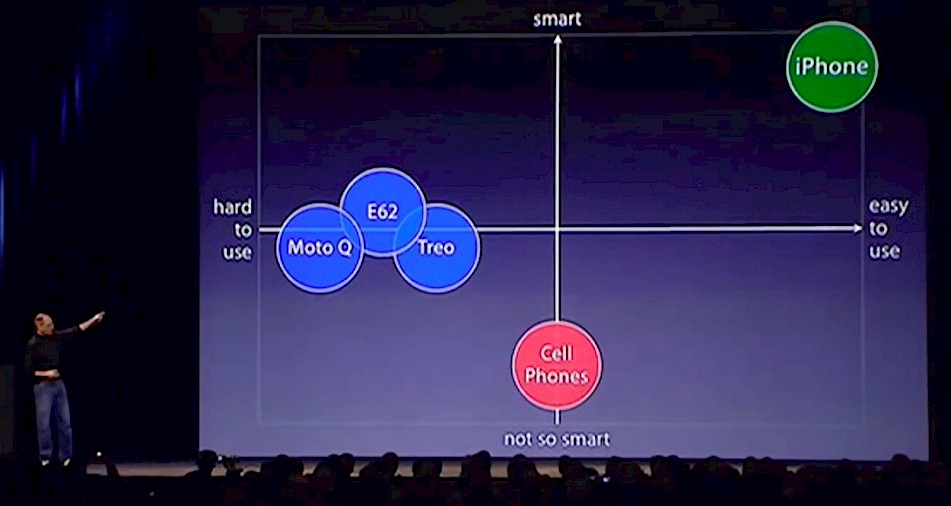 Which is where, he reveals with a flourish, the iPhone will be transformational. A revolutionary phone that would be ‘way smarter than any mobile device’ and ‘super-easy to use’. The audience is floored.

And with that simple graph, Steve Jobs shows us the power of ‘Norm-variance’. If you want to showcase something (a product of yours, a finding from an analysis, your work achievement over the last year), just showing the product/finding/achievement is not good enough. You have to ‘juxtapose’ it with the right norm – one that would make your finding stand out (ideally visually). That leaves a strong imprint and significantly enhances the communication impact.

Real-life Tony Stark, the sometimes-controversial Elon Musk, also invests a great deal of effort in his storytelling. One of his memorable launches was that of the Tesla Powerwall. In this one, Musk is showcasing the plans of Tesla Energy to generate solar power and store it in these cool, powerful battery packs that can be installed at your home.

Again, to showcase the value of his solution, Musk doesn’t directly dive into the product. He first vividly describes the existing carbon-fuelled world with data and evocative visuals (the norm as of now). He then describes the solution – the promised land of how things can be if his vision is adopted (the variance from the norm).

The contrast – between the two visuals, could not be more stark.

Finding the ‘right’ norm: Learning from the ‘Sapiens’ star

Yuval Noah Harari has become a global celebrity on the back of his disruptive thinking, with best-sellers like Sapiens and Homo Deus. He frequently uses the norm-variance concept to highlight a key point – for example the way he described why the Persian empire of Cyrus the Great was so radical for its age.

A more recent example is an interview of Harari published on 30th October, 2018. The interviewer asks him a provocative question, along the lines of: Do you think we are headed for a global war, given the nature of leaders like Trump?

What is implicit in the question is the comparison of what is happening now (2018) with what the situation was a few years ago (say 2015). The norm and variance is just 3 years, driven by our present-focused news cycle.

What Harari does however, is to take the long view. Here’s how he responds:

“…so far, the world is still in the most peaceful era that we have ever seen. More people die today from eating too much than from human violence, which is an amazing achievement. But we need to remember that the current era of peace is not the result of some divine miracle. It is the result of humans making wise decisions, especially about greater international cooperation. If humans start making unwise decisions and if international cooperation deteriorates, war can return and even in a worse form than ever before, especially nuclear war.”

“More people die today from eating too much, than from human violence” – that one line encapsulates Harari’s unique ability to look for the right (historical) norms and juxtapose them with today’s reality.

Why does this work: The principle of surprise

Why do such a diverse set of storytellers use this principle? Because it’s about the power of surprise. When something varies so significantly from the norm, then we are surprised (as showcased in this post about an ad that launched a billion dollar company). When we are surprised by something, we pay attention to it. And that’s what all good storytellers should try to get: the audience’s attention.

How can you use it: Look for the right norms

For your next talk, presentation or other formal communication, when you are sharing a finding, share it with the right norm, ideally visually. To illustrate this, take a look at the below image and ask yourself: Is there anything remarkable about the icons on their own (especially when you consider one row at a time): 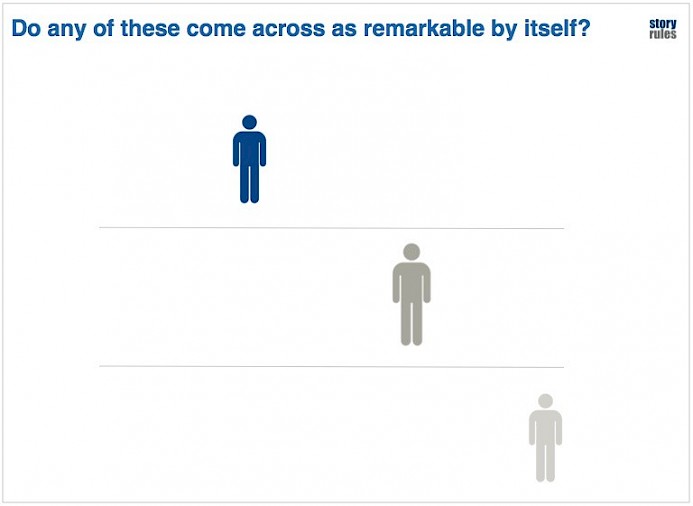 You’d be thinking – not really. There’s nothing remarkable about these icons on their own.

Now, in the next visual, I’d like you to reflect on where your eyes go in each row: 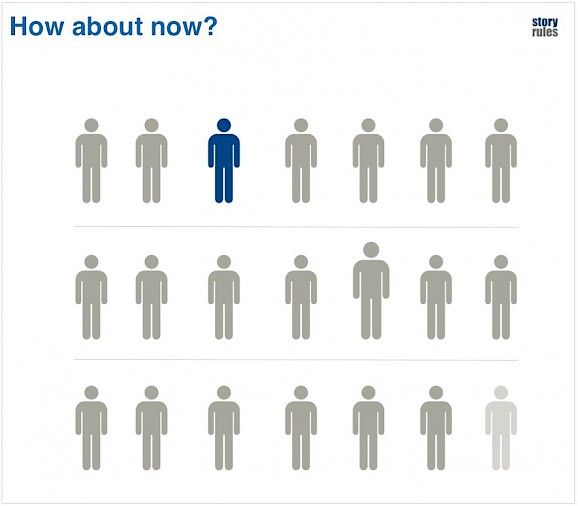 Clearly you are noticing the blue guy in the first row, the tall one in the second and the lighter one in the third.

By the way these are exactly the same three icons you saw in the earlier picture. You didn’t find it remarkable then… what happened now?

That’s right – the magic of contrast. The magic of norm-variance. So, just showing your finding/insight (the blue guy) is not good enough. You have to juxtapose that against the right norm (the grey guys).

Let’s look at a corporate example to wrap things up.

Companies do it too – a case study of HUL

Steve Jobs, Elon Musk, Yuval Harari – all these are fine, but is this principle used in boring ol’ corporate presentations? For sure they are. A great example is this one, where HUL was telling its 2015 volume growth story in an investor presentation. 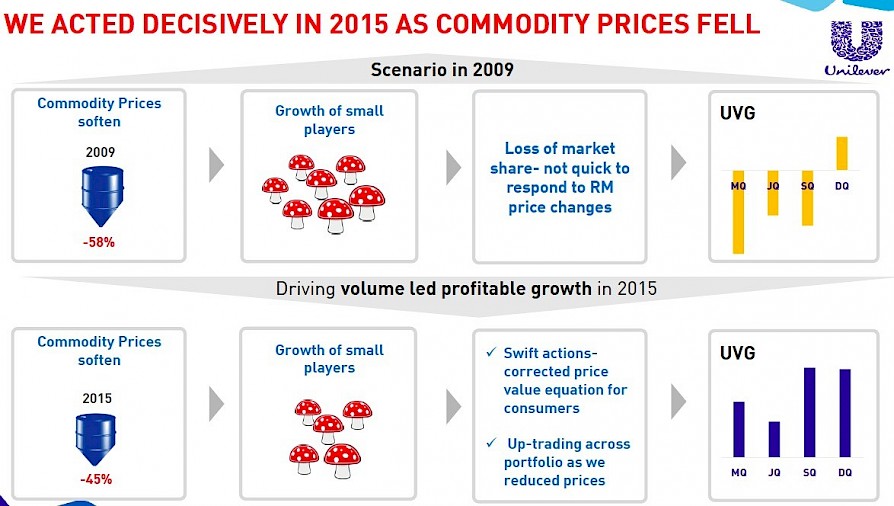 What they did in this slide is to contrast the 2015 performance with the right norm – a very similar situation in 2009, which resulted in a much different outcome. Using this juxtaposition, and showcasing a high norm-variance, they could make a strong case for how agile and nimble they are in responding to changing market conditions.

Norm-variance is at the heart of good storytelling. Stories are about surprising the audience, and there’s nothing better than the right norm-variance to do so. In your next presentation, ensure that you have this ingredient in the right quantity. Messrs Jobs, Musk and Harari certainly do so!