The definitive report on the Indian Startup ecosystem

Welcome to Story Rules on Saturday - your weekly content recommendations from the world of storytelling.

This week's headline report is a stellar attempt at painting a detailed data-driven picture of the Indian startup ecosystem.

- #SOTD 31: Present tense, future perfect?: The stock market falls 36% in just a month... takes five whole months to recover those losses. And a writer finds that to be a remarkably quick recovery. This post explains why using the power of norm-variance.

- #SOTD 32: A picture worth a million words: In this post, I analyse the attention grabbing way in which Sajith Pai and Amal Vats start the 'Indus Valley Annual Report 2022'.

- #SOTD 33: India's 4E model for socio-economic advancement: There are many ways in which Indians can get ahead in life. By categorising them, giving them the right labels and creating a mnemonic, you make it easier for the audience to understand and remember them. This is what Sajith and Amal do in this slide when they talk about the 3E model of economic advancement in India.

- #SOTD 34: Three comic-strip style slides to showcase a transition: What can data storytellers learn from the art of creating comic-strips? A lot! In this post, I profile three slides in the report which use this technique to make a compelling point.

- #SOTD 35: A key pattern-finding idea; and a cheeky callback: The US and other western powers are angry with India's plans to buy oil from Russia. Shekhar Gupta justifies India's stance in this hard hitting column. Check out the cheeky callback in the last line.

Those were the #SOTDs of last week. In case you would like to get these daily emails in your inbox (9.30 AM, India time), here's where you hop onboard (sorry that the link didn't work last time - it should this time!):

Report of the week

a. The Indus Valley Report 2022 by Sajith Pai and Amal Vats (Blume Ventures)

Sajith Pai is one of my most admired storytellers. You should follow him on Twitter if you aren't doing so already.

This 102-page report on the Indian startup ecosystem makes several interesting points. I plan to do a narrative deep-dive sometime later.

For now, I'm leaving you with some of the interesting slides that caught my attention from the report: 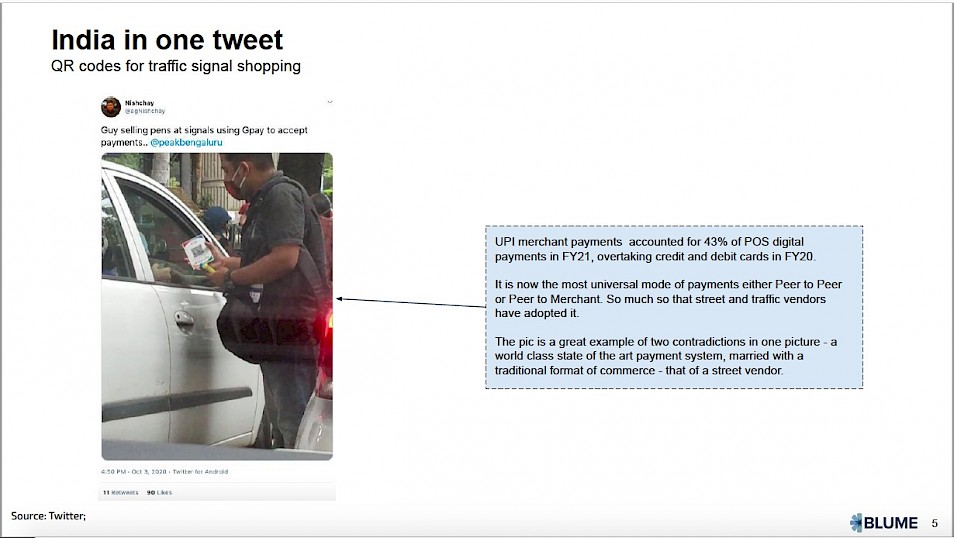 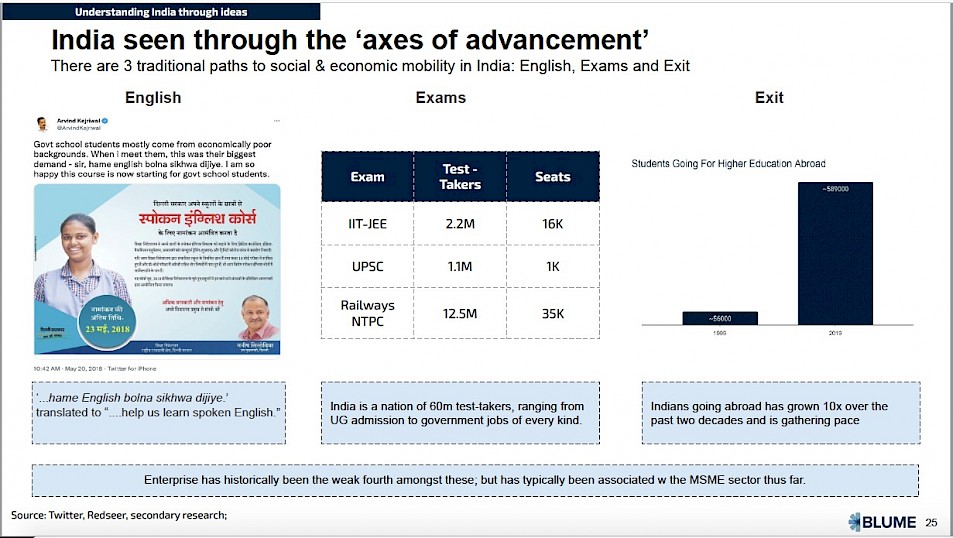 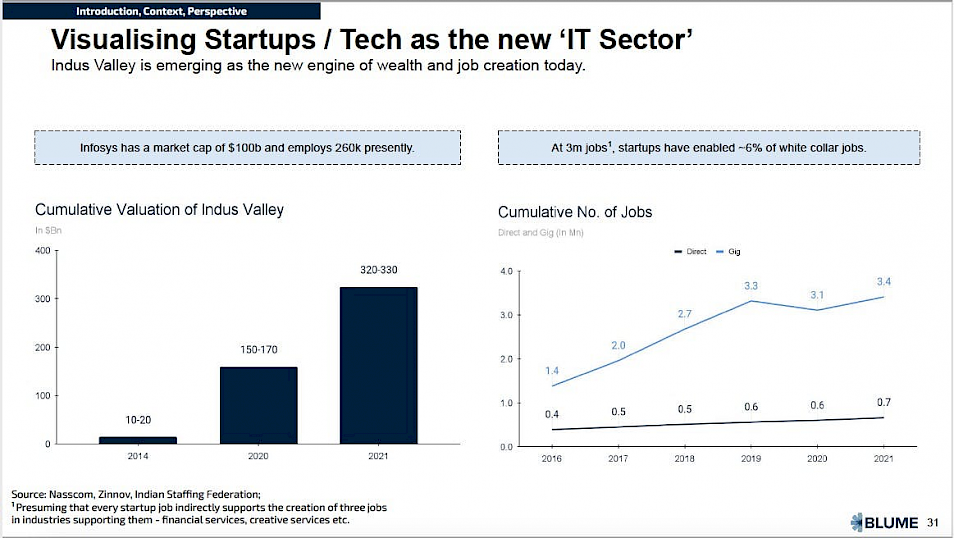 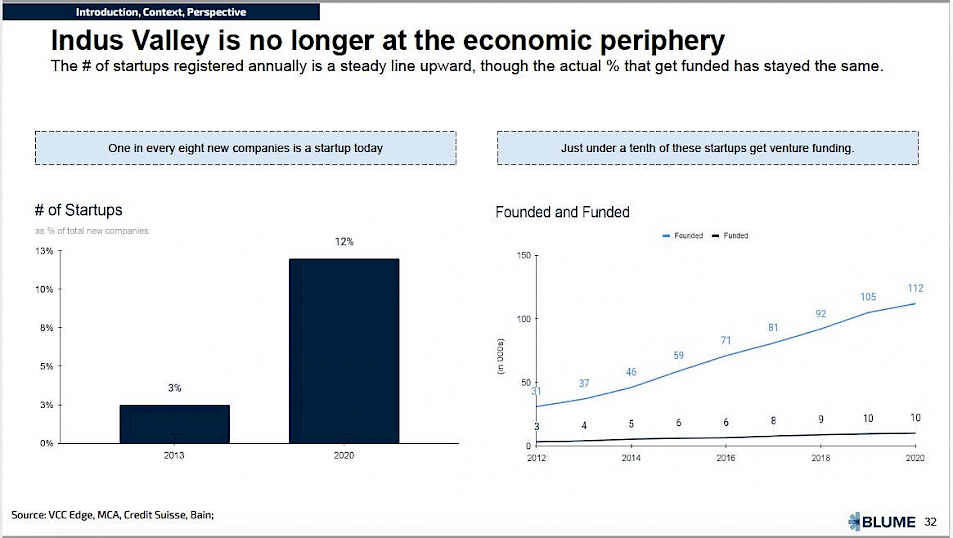 Morgan Housel is gifted at writing complex ideas in ridiculously simple language. The message is profound - but the writing is so good it makes reading it both effortless and fun.

Morgan's book 'The Psychology of Money' has sold more than one million copies and has been translated into more than 30 languages. I wrote a review about the book in Oct-2020.

This conversation is a fascinating deep-dive into how Morgan thinks about investing, writing and life in general.

It does get into some detail into several aspects of investing (which doesn't interest me much), but the unending supply of personal stories from Morgan makes the content very engaging.

Also, he has a very interesting process to cope with writer's block: go for walks around the neighbourhood:

The actual writing for me — I would say too, I go for a lot of walks. I walk several times a day just around my neighborhood and 90 percent of the quote-unquote, “writing” takes place there. I don’t think that well when I’m sitting at my computer, in front of a Google Doc typing, but when I get up and move around, and go for a walk, then I’m like, “Oh, here’s how I can write that paragraph. Here’s how I can do it.” Like, “Oh, actually that sentence, here’s a better way to phrase it.” All that takes place when I’m walking, never when I’m sitting. And so, for me, whenever I feel like an article’s not going well or I’m stuck a little bit, it’s like, “Okay, let’s go for a walk.” And then, most of the time I’ll figure it out there.

The other thing that I’ve come to realize about myself is that the majority of the time that you have writers’ block, it’s not that you have writers’ block, it’s that your idea sucks. And that’s why you can’t figure out a way to write it. But good ideas are very easy to write and bad ideas are hard. Like that’s pretty easy. So, a lot of writers when they get writers’ block, they’re like, “Oh, how can I muscle through this and figure it out?” And I think nine times out of 10, you’re like, “No, let’s take a step back.” And maybe it’s hard to put this into words because the idea that you’re trying to get across is wrong. And that’s why it’s hard. So, I’ve tried to do that with myself of just quitting pretty easily. Even if I’m halfway through an article and I’m like, “Oh, I can’t figure out how to phrase this.” It’s like, well, maybe that’s because my idea’s wrong and I should just move on to something else.

I need to do more of this!

This is such a simple hack to get people to speak up/contribute:

In this thread, Ramanand gives a smart tip to deal with the overload of newsletters (ahem) that we have been hit with: create a separate email for them, and don't worry about achieving Inbox Zero with them. Just dive in and sample the content whenever you get the time. 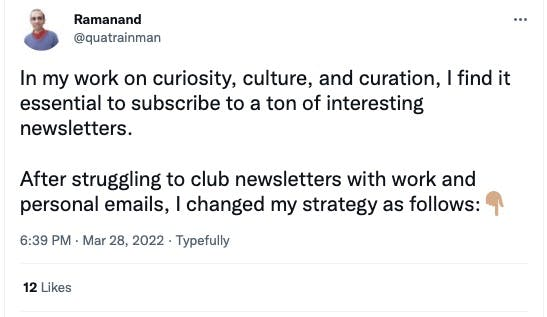