This week's book is a fascinating dive into the origins of words by one of my favourite authors - Mark Forsyth.

Here's a quick summary of the five #SOTD emails from the past week - a week when I hit the 100 number!

- #SOTD 98: A simple visual to compare populations (Amazing Maps): A map that is worth a thousand words - and tells the story of how population densities vary widely by geography.

- #SOTD 99: Perspective can solve all wars (Tim Urban and Carl Sagan): The stunning images from NASA's James Webb telescope has given us an incredible window into the wonders of our universe. Tim Urban uses that to put our 'petty' wars in perspective.

- #SOTD 100: A nudge for hand-washing (Indigo Airlines): I come across a cute and funny note inside an Indigo Airlines washroom - that tells a compelling story.

Those were the #SOTDs of last week.

As mentioned in the last one, I am taking an indefinite break from the #SOTD emails for now (think of it as the end of Season 1). I will be back with a new and revamped Season 2 sometime soon!

Still, if you'd like to sign up for these emails in your inbox (9.30 AM, India time), here's where you hop onboard:

​a. 'The Etymologicon: A Circular Stroll Through the Hidden Connections of the English Language' by Mark Forsyth​

I'm a huge fan of Mark Forsyth's work - I had discovered his writing through the peerless 'Elements of Eloquence' - perhaps the most entertaining non-fiction book I've read.

I had similar high high hopes from The Etymologicon... which is fabulous to be sure, but just not as stellar as 'Elements...'

The book consists of a series of small, 'snackable' chapters where Mark picks up everyday words and goes on a global romp to uncover its origin story.

Mark is obsessed with this - so much so that he warns you not to trigger the obsession by asking him a question about the same:

Occasionally people make the mistake of asking me where a word comes from. They never make this mistake twice.

That dry British wit constantly shines through. For instance:

Myles Coverdale was an early Protestant who believed in principle that the Bible should be translated into English. He decided that, as nobody else seemed to be doing it, he had better get on with the job himself, and he didn’t let the tiny detail that he knew no Latin, Greek or Hebrew get in his way. This is the kind of can-do attitude that is sadly lacking in modern biblical scholarship.

Let us now move our attention to some of the cool word-origin stories that the book reveals. Here are 8 great examples:

1. How is toxin - the word for poison - derived from the Greek word for bows?

2. The origin story of the word quisling (which means someone who collaborates with an enemy occupying force - based on a Norwegian guy who partnered with the Nazis during WW2). In the book, Mark quotes this superb paragraph from The Times - check out the last line:

Major Quisling has added a new word to the English language. To writers, the word Quisling is a gift from the gods. If they had been ordered to invent a new word for traitor … they could hardly have hit upon a more brilliant combination of letters. Aurally it contrives to suggest something at once slippery and tortuous. Visually it has the supreme merit of beginning with a Q, which (with one august exception) has long seemed to the British mind to be a crooked, uncertain and slightly disreputable letter, suggestive of the questionable, the querulous, the quavering of quaking quagmires and quivering quicksands, of quibbles and quarrels, of queasiness, quackery, qualms and quilp.

Ps in Latin turn to Fs in German (and hence in many English words), which is how paternal pisces became fatherly fishes.

4. What's the connect between a popular programming language and an iconic British comedy sketch group

Monty Python is, for reasons best known to nobody, rather popular with computer programmers. There’s even a programming language called Python, based on their sketches.

5. What is common with something women put on their eyes and something that intoxicates you:

Alcohol comes from al (the) kuhul, which was a kind of make-up. Indeed, some ladies still use kohl to line their eyes. As kohl is an extract and a dye, alcohol started to mean the pure essence of anything.

6. On that topic, the link between the Hindi word for 'five' and a cool cocktail:

7. A fascinating story behind the words bunkum and debunk

It was such an ingenious idea (and such a common practice in all democracies) that the phrase caught on, and speaking to Buncombe soon got shortened to speaking bunkum and then just plain bunkum, which needs to be debunked.

*Buncombe in North Carolina was his constituency

8. The origin of oxymoron

Incidentally, moron meant dull, but in Greek oxy meant sharp. Many, many chapters ago we saw how oxygen got its name because it generated acids, and the oxy in oxymoron has the same root. So an oxymoron is a sharp softness.

a. Galapagos by Radiolab

Radiolab is the best science storytelling podcast - perhaps the best non-fiction podcast out there!

In this gripping story (originally aired in 2014), they narrate the story of the efforts to revive the the endangered Galapagos giant tortoise.

Its a story that features the cold-blooded slaughtering of 250,000 innocent goats.

And you are on the side of the killers.

Uff, where does Tim come up with these gems. I can spend hours looking at these quirky maps. 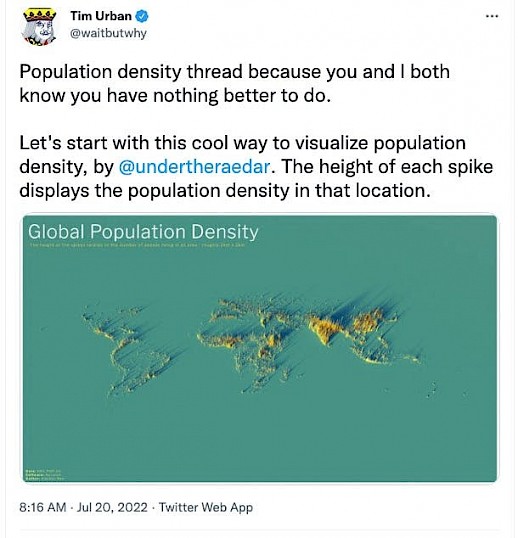 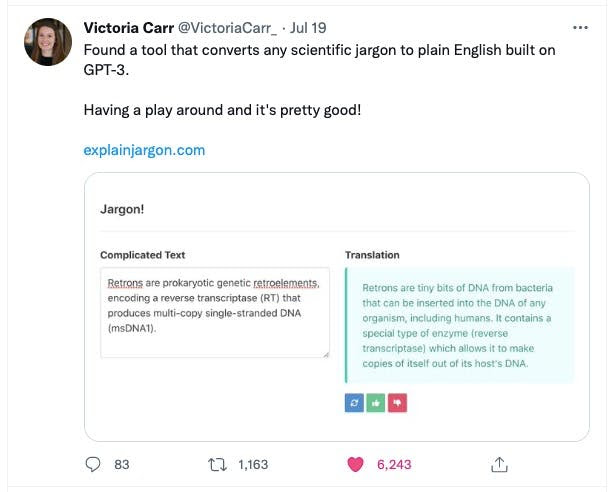 "After all, fiction is only fact minus time."

- Mark Forsyth in The Etymologicon

TV Series of the week

​a. Upload on Amazon Prime​

I've been seeing this for several months now and just completed the last episode of Season 2.

The Upload is a series set in the future where humans can 'upload' their consciousness into (the metaverse?)... an AI generated VR program called Lakeview.

The premise is fascinating - and I found the script and treatment consistently engaging and gripping.

Sure there are slow portions, but overall it left me craving for Season 3. There's not much higher praise for a TV series in these days of abundance of entertainment options.

Photo by Sven Brandsma on Unsplash