Welcome to Story Rules on Saturday - your weekly content recommendations from the world of storytelling.

This week's flagship article warns us about the likelihood of a sustained increase in interest rates... which may not be good news for most emerging economies.

- #SOTD 41: Finding the simplest explanation: Why did Russia invade Ukraine? And how has the reaction of Western countries and companies been to the invasion? Experts have focused on rational reasons for all these events, with many attributing this to malicious actions by leaders. Thinker and geopolitical affairs expert Nitin Pai has a simpler explanation: "Never attribute to malice that which is adequately explained by stupidity."

- #SOTD 42: Using contrast and an analogy to combat fear of DALL-E 2: A new AI technology is released. It can create life-like visual art with just simple word cues. Suddenly folks start crying hoarse about the destructive power of AI and how this will mean the end of visual artistry.

I loved this reaction that a Twitter handle put out: Just a simple image that shows the history of such panicky over-reactions to all new technology. A great example of the use of visual contrast.

- #SOTD 43: The new CRED Ad - surprising yet familiar: The CRED guys are at it again. In a new ad that parodies the iconic 1990s show, Antakshari, they use a powerful storytelling principle: the balance between familiarity and novelty.

- #SOTD 44: Making $150M relatable: Among all the ink being spent on the Elon-Musk-Twitter-Takeover issue, here's a thought-provoking article by Prof. Scott Galloway. In it, I focus on a simple storytelling technique he uses - making large numbers relatable.

- #SOTD 45: Going back 157 years to spot a trend: How far back in time would you go to compare a number? In this fascinating interview, Jim Grant gives us a view of interest rates from 1865 onwards! A great example of norm-variance.

a. The End of an Era: Jim Grant on Interest Rates​

Jim Grant is (literally) an institution in the area of interest rates. In this fascinating interview, he shares his thoughts on why he thinks the world might be facing a longish period of rising interest rates.

This is the main insight he shares:

Octavian Report: Your newsletter is called Grant’s Interest Rate Observer. You’ve now been watching interest rates for nearly 40 years. For almost that entire period, the trajectory was down, down, down. Do you think we’re now going into an upswing that will be similarly long?

Jim Grant: Yes, I think so, and I have thought that prematurely at intervals going back many years. The striking thing about the bond market and interest rates is that they tend to rise and fall in generation-length intervals. No other financial security that I know of exhibits that same characteristic. But interest rates have done that going back to the Civil War period, when they fell persistently from 1865 to 1900. They then rose from 1900 to 1920, fell from 1920 or so to 1946, and then rose from 1946 to 1981—and did they ever rise in the last five or 10 years of that 35 year period. Then they fell again from 1981 to 2019-2020.

When asked whether he believes the US Fed has what it takes to tackle the issue, he... well doesn't seem very confident at all...

OR: What do you expect the Fed will do now?

OR: Which is what?

Grant: Oh, that’s my reflexive response to any question about the Fed. I think it will deliver too little and too late, as usual. And then overdo what it was lazy in starting to do.

I'm not at all an expert on this - but this does seem like an end to a decades-long easy-money party, punctuated by a few short recessionary periods. The implications of a sustained rise in interest rates - on stocks, startup-valuations, investment avenues, jobs - are massive. I would love to know your take on this topic. Please share any interesting articles you come across!

And if you are feeling a little blue reading about this, the next article should calm you down...

The article's tagline reads: "The secret to satisfaction has nothing to do with achievement, money, or stuff."

I think it is essential reading for all of us... especially those who are constantly running just to stay where they are...

Arthur, who writes a column about human happiness for The Atlantic and teaches classes on the subject at Harvard, shares this historical example:

Abd al-Rahman III, the emir and caliph of Córdoba in 10th-century Spain, summed up a life of worldly success at about age 70: “I have now reigned above 50 years in victory or peace; beloved by my subjects, dreaded by my enemies, and respected by my allies. Riches and honors, power and pleasure, have waited on my call.”

And the payoff? “I have diligently numbered the days of pure and genuine happiness which have fallen to my lot,” he wrote. “They amount to 14.”

Why do we struggle so much to remain happy? Why is our normal state one of 'mild dissatisfaction and stress' just punctuated by fleeting moments of happiness?

Arthur shares this example from his own life - one that many of us would be able to relate to:

...time and again, I have fallen into the trap of believing that success and its accompaniments would fulfill me. On my 40th birthday I made a bucket list of things I hoped to do or achieve. They were mainly accomplishments only a wonk could want: writing books and columns about serious subjects, teaching at a top school, traveling to give lectures and speeches, maybe even leading a university or think tank. Whether these were good and noble goals or not, they were my goals, and I imagined that if I hit them, I would be satisfied.

I found that list nine years ago, when I was 48, and realized that I had achieved every item on it. I had been a tenured professor, then the president of a think tank. I was giving frequent speeches, had written some books that had sold well, and was writing columns for The New York Times. But none of that had brought me the lasting joy I’d envisioned. Each accomplishment thrilled me for a day or a week—maybe a month, never more—and then I reached for the next rung on the ladder.

There is a name for this feeling:

The unending race against the headwinds of homeostasis has a name: the “hedonic treadmill.” No matter how fast we run, we never arrive.

How to cope? Well its not easy. One pathway suggested is to reduce our wants. Easier said than done though.

In the article, Arthur shares a few specific ideas which can help. Even if it doesn't, it is a great read to just be aware (or remind ourselves) of the fact that we shouldn't be so hard on ourselves.

(Hat/tip: I got the article reference from the Clear Writing Community)

a. Stress by Radiolab​

Radiolab is one of the OG shows in the world of podcasting. They have been putting out fabulous content for a long time now. I cannot believe that this episode originally aired in 2007!

It has a grippingly crafted narrative, wonderful voices and some great music. An absolute work of art and a fascinating eye-opener to the phenomenon of stress.

Again, you will be kinder with yourself after you hear the episode.
​

b. Michael Lewis in conversation with Ira Glass​

Two genuine titans from the world of narrative storytelling. One is a guy who's written some of the biggest non-fiction hits (Liar's Poker, Moneyball, The Big Short, The Undoing Project, The Premonition) and the other, is an OG in the world of podcasting in the US - the guy behind the 'This American Life' show.

In this conversation, both review some of their early work, critique it and trace their evolution. Again, it might make you feel less bad about your own work.

Also, it is fascinating to see them cringe at their own early work... while being generous to the other person!
​

Here's a superb tweet thread about how they rescued an iconic monument: 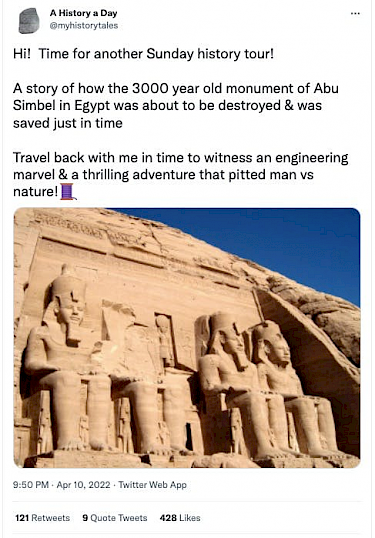 ​Trust Sajith Pai to coin a term for a practice that is common enough to require naming, but not so common that it has been named yet! 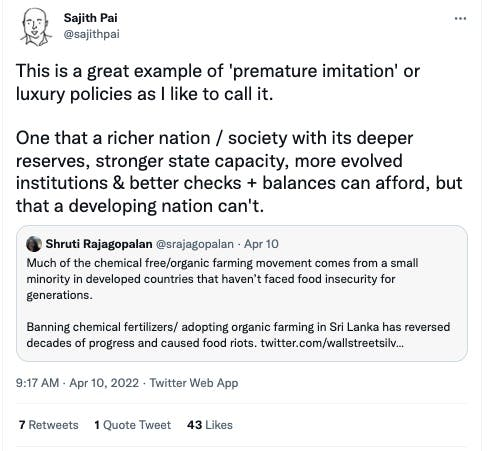 ‘Life is what happens to you while you're busy making other plans.’

One of my favourite US sitcoms is Brooklyn Nine Nine. Right from the very first episode my wife and I fell in love with this goofy, lovable set of characters. The brilliant yet child-like Peralta, the uber-organised Amy, the super-serious Captain, the full-on whacky Gina...

Each episode starts with a 'cold open' - a short comic opening that tells a small story in and of itself and yet acts as a buildup for the main episode.

Check out the first one - Boyle Bingo.

Photo by Pablo Heimplatz on Unsplash