This week our headline article is a fascinating dive into Spain's history by Tomas Pueyo.

​a. 'A brief history of Spain' by Tomas Pueyo​

How do you start a tweet thread about the history of Spain, a country of just about 46M people (think Delhi+Mumbai combined), but one whose language is spoken by 600M around the world?

You create a compelling hook. 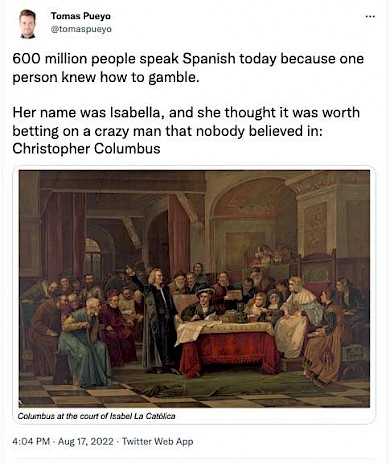 That's right - Spain's greatest legacy to the world is its language. Almost all of the nations of Central and South America (except Brazil) and a very substantial proportion of folks in the US speak Spanish. 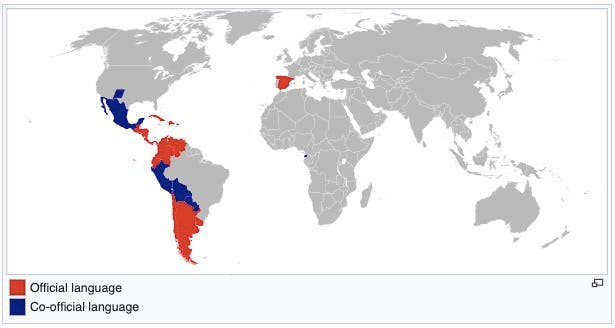 Why was it Spain that led the discovery of America?

Why despite having such a massive lead in exploring the New World, Spain lost out to future powers such as Netherlands, Britain and Germany?

Why is present-day Spain struggling with independence movements from its own regions?

All these questions - and more - are answered in this fascinating post by Tomas.

As you'd expect in a piece by him, geography features prominently

Mountains, coastal areas, river valleys, and internal plateaus are the reasons why people and wealth are where they are today in Spain:

He uses this image - so vivid!

Tomas intersperses his narrative with several vivid maps and images and paints a sweeping picture of the history of Spain from ancient times to the present day.

If you liked this, check out his other articles on the history/geography of various countries.

​b. When Data Fails by Nick Magguilli​

"In God we trust, everyone else brings data" is an old adage attributed to W Edwards Deming.

But how much can you trust the data itself?

In this perceptive piece, Nick shares several stories were data was used erroneously which resulted in a deeply flawed narrative.

Take this famous instance for example.

...data fails when it’s wrong. Just as we stand on the shoulders of giants when relying on correct ideas, we can be imprisoned by the chains of ignorance when relying on incorrect ones. Consider the case of the infamous Reinhart-Rogoff paper “Growth in a Time of Debt” that contained a major Excel error. As stated here:

"Reinhart and Rogoff’s work showed average real economic growth slows (a 0.1% decline) when a country’s debt rises to more than 90% of gross domestic product (GDP) – and this 90% figure was employed repeatedly in political arguments over high-profile austerity measures."

However, this 0.1% decline was inaccurate because an Excel formula hadn’t been dragged down properly. After fixing the formula, the 0.1% decrease became a 2.2% increase, completely changing the paper’s conclusion.

Maybe it is time to change the Deming quote to: "In God we trust, everyone else brings data, which we will triple-check, corroborate and triangulate. Just in case".
​

Sidharth Monga is one of the sharpest writers in the Cricinfo galaxy. In this piece, he calls out what he sees as a pivotal moment in the history of the sport.

There are quite a few such moments that one can remember, which changed the course of the game - the Packer World Series, the 1983 India world cup win, the match-fixing scandal, the 2007 India T20 World Cup win, the launch of the IPL.

But those are big moments - moments that no observer of the sport can miss.

This one - that Monga identifies - is a 'small' moment. One that most fans would have even dismissed as a minor news item:

​(Trent) Boult has opted out of the central contract with New Zealand Cricket. He is well aware that this could mean an end to his New Zealand career.

But Monga is able to see it for what it is - the long-term rise of league cricket and the resulting decline of international matches.

This is a significant moment in the rapid process of normalising not sacrificing it all for an international career. A realisation that what once used to be the ultimate dream - a central contract, 100 Tests, 400 wickets, world titles, the satisfaction of winning an away Test series - can seem like shackles to some. And that it is okay to break those shackles. To Boult, this realisation has dawned at a point where he is already a superstar of the game; to some others, it might come sooner.

Good storytellers have the ability to

- Position the news item in the right historical context, and

- Suss out the implications for the key stakeholders.

Monga does that superbly in this piece.

It's rare to come across good Indian podcasts (of course there's 'Play to Potential', 'The Seen and the Unseen' and, ahem, The Story Rules Podcast) - but I was hooked listening to this.

It is a series hosted by Hindustan Times journalist Prashant Jha, that narrates the key events of the Indian independence struggle starting from the 1857 Uprising.

Over 13 episodes, the series covers different stages of the independence movement in conversation with leading experts. For instance, the first episode on the 'Sepoy Mutiny', features William Dalrymple, the foremost expert on this topic.

Prashant has done his research and tees up the questions nicely for Dalrymple. Now Dalrymple is a stellar storyteller, with an authoritative command on the topic and an unparalleled ability to make history come alive for the audience.

I learnt a lot of new aspects and answers to questions like - how were a small group of traders from Britain able to hold sway on an entire subcontinent... and then how did they manage to anger the very army they had assiduously assembled.

A quibble - the audio could be better. I found it difficult to follow Dalrymple's words!

A great way to motivate taxpayers - tell them the 'So What' of their actions: 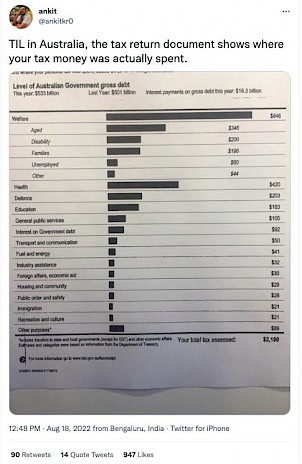 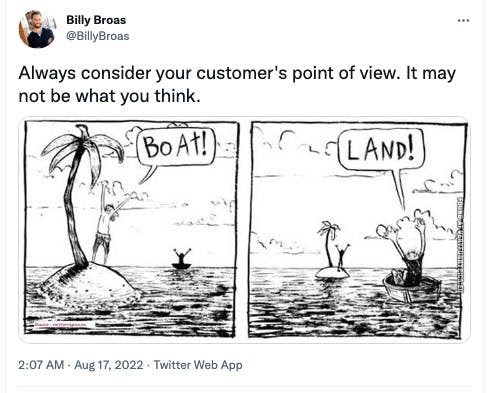 I'm loving the threads on lesser known aspects from Indian history by The Paperclip - give them a follow if this appeals to you. 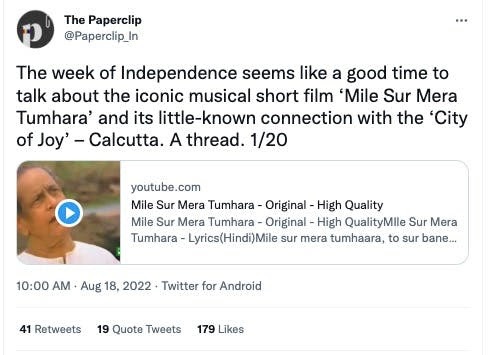 "I like geography best, he said, because your mountains & rivers know the secret. Pay no attention to boundaries."

Classic Foil Arms and Hog humour. I really loved the sharp writing (note how they reverse engineered questions for typical Scottish sounds and words!) and the brilliant expressions on Foil's face!

Photo by Johan Mouchet on Unsplash