This is Shrehith Karkera, the co-founder - and you could say Chief Storyteller - at Finshots.

Finshots - founded by IIM-A grads - is in the business of simplifying financial news. About 1.5 years back, it got funded by Zerodha (through its investment vehicle).

Their flagship product is the Finshots daily newsletter, which reaches 400K subscribers - a staggering number, considering they write about complex topics on finance and economics. (For comparison, the Business Standard newspaper, which launched in 1975, has a circulation of about 189,000).

The Finshots Android app has 100K plus downloads and a 4.9 rating with more than 11K reviews! (They have a 4.9 rating on the iOS app too).

Their podcast is ranked #11 across all Indian podcasts and is the #2 news app.

And they have achieved pretty much all of this over the last 1 year.

While there are many factors driving their success, a lot of it is due to the high quality of storytelling they employ in simplifying financial news. And I was super curious to interview the young Shrehith Karkera, who was the main guy doing most of the writing.

You’d expect Shrehith to be an economics and finance wizard, someone was reading and writing from childhood.

Shrehith struggled with finance and economics subjects at IIMA.
​

And more surprisingly, he was someone who never read or wrote anything in his childhood. He essentially started reading and writing seriously only in his early 20s.
​
In this episode, I have a wide-ranging conversation with Shrehith. We speak about his upbringing, what shaped his insatiable curiosity, his eclectic reading choices and his core writing philosophy.

​Here are some extracts from the 3Ps - the Personal, Philosophical and the Practical:

“Yeah. So I never read until about I think I was maybe 22 I guess. That's when I sort of started reading”, and

On the personal side, these were my most surprising findings during the interview.

So, anyone who feels they don’t have it in themselves to become good storytellers, since they ‘never were into reading or writing’... would change their mind once they listen to this story.

“My first year MBA grade sheet made for grim reading, C in Accounting, B in Financial Markets, C in Costing, C in Macroeconomics, C in Microeconomics. It was so bad that in my second year, I refused to pick a single course in Finance or other related matters. And yet, ever since then, I have gone on to write everything at Finception, and most of what's on Finshots, and somehow managed to build a career, doing the one thing I despised the most”.

For Finshots it’s all about making it simple for the audience. Here’s Shrehith:

“A few things that I keep in mind. One is to assume absolute ignorance from the reader. I mean, no matter, you know, it can get repetitive sometimes, because I'm talking about the same things, and I'm offering the same explanations. But, I still believe that you know, if it's a cost-benefit analysis, one outcome is that it gets repetitive and the other is nobody understands. I'd much rather go with the repetitive….

Now there are some stories where if you assume absolute ignorance, people think it's the easiest thing to do, but it's not. In fact, I remember a quote where they say easy reading is hard writing.”

“I almost always ask, can I build the story in such a way that at the end of it you know (we arrive at the headline)…

Every story (typically) begins with the headline, and then they sort of go into the details, etc and that’s a terrible thing to do with financial news...

I can give you an example. For instance, the story that we did on Biocon, the headline was something like this: ‘US FDA approves Biocon’s, biologic insulin Glargine after completing phase 3 trials’. People are well versed with Phase 3 trials now. But if I told you this headline will, maybe one year ago, what it means, right,… and I think that man that doesn't make any sense. Nobody knew biosimilars...

I loved this approach - Don’t start with the headline, build towards it.

Enjoy my conversation with Shrehith at your favourite Story Rules podcast location:

I hope you find the conversation thought-provoking and useful. Happy listening!

PS: Fair warning - you’ll see my inexperience as a podcast interviewer coming into play here. The conversation moves back and forth between topics… Hopefully, I’ll become better with more practice!

Also, in some sections, I have made edits to ensure continuity and clarity.

Bonus: I did an analysis of the Coinbase IPO Prospectus letter. 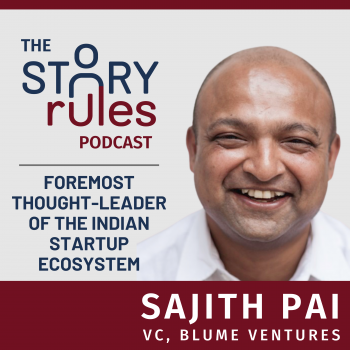