After Twitter's Board approved Elon Musk's acquisition offer for the company, the CEO, Parag Agrawal held an All-Hands meeting.

During the meeting, he was asked why he voted in favour of the deal. This is what he is supposed to have said:

It's a pretty standard answer and most commentators would have accepted it as an acceptable non-surprising response to such a question.

Not Matt Levine though.

This genius writer of the daily newsletter, Money Stuff, had a very interesting take on this response. A take based on the storytelling concept of 'norm and variance'.

First, Levine offered some context - about how the idea of corporations focusing mainly on shareholder value is now outmoded:

This is a traditional story, but it sounds a bit strange in 2022. Ten years ago if you had said that the job of a board of directors was to maximize the stock price, a lot of people would say “well sure yes of course,” but now we have stakeholder capitalism and environmental, social and governance investing. In 2019, the chief executive officers of many of America’s biggest public companies (not Twitter) signed a Business Roundtable statement that “redefines the purpose of a corporation,” saying that they “share a fundamental commitment to all of our stakeholders,” not just shareholders. (I made fun of it here.)

And the shareholders agree! In particular, Larry Fink at BlackRock Inc. has told CEOs that they “must benefit all of their stakeholders, including shareholders, employees, customers, and the communities in which they operate” and that “putting your company’s purpose at the foundation of your relationships with your stakeholders is critical to long-term success.” (I made fun of this here and here.) Big companies now face activism whose message is not so much “make changes to maximize the share price” as it is “make changes to improve your environmental and social impact”; Exxon Mobil Corp. lost a proxy fight to a tiny activist that wanted it to speed up its transition away from fossil fuels.

- The earlier norm was: Focus on Shareholder value

- But today's variant norm is: Benefit all stakeholders (including employees, customers, communities)

Which is what makes Agrawal's response surprising. Levine again:

And then Twitter’s CEO shrugs and says, in effect, “meh look this deal might be bad for our users and employees and product and mission, but we can’t think about that; the price is right and my only duty is to shareholders.” It’s strange!

If you want to highlight what is surprising about something, show the norm and highlight the variance from the norm 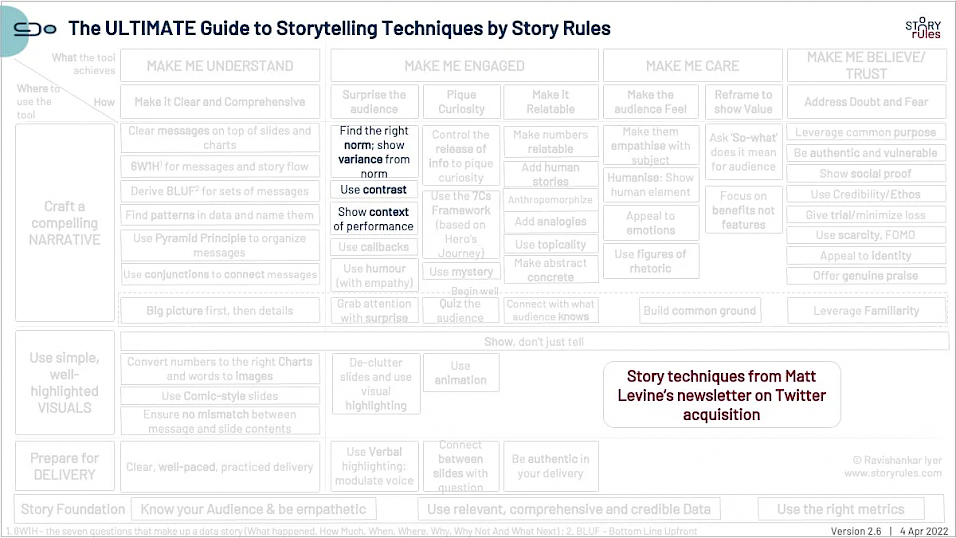