Today's Times of India has this headline on the front page:

Some of you may sympathise with this viewpoint - why should India be buying from (and indirectly supporting) an aggressor nation like Russia, especially when innocent Ukrainians are losing lives?​

Should we not listen to the moral entreaties made by the "good guys" - the US and other western powers?

Time for a history lesson folks.

In this hard-hitting piece titled 'What’s behind India’s Ukraine policy, Western hypocrisy & how nations act in self-interest', leading journalist Shekhar Gupta lays down the case for national interest (interestingly, also the name of this weekly column).

In it, Gupta makes one key point:

"No nation, weak or strong, rich or poor, has its foreign and strategic policies determined by morality... Nations act only in their own interest. All else comes later."

The article then shares example after example of this principle... making it a great case study for a pattern-finding insight:

- Switzerland, with its eternal neutrality and its God-given right to fatten on the ill-gotten wealth of thieves, thugs, mass killers, dictators and despots from across the world.

- The super-moralistic Sweden, supporter of all righteous causes and activists in the world, which paid bribes in poor India to sell its artillery guns (Bofors) and never bothered bringing anyone to account in 35 years?

- America, which becomes so holier-than-cow when the Russians invade Afghanistan, but has zero compunction occupying the same sovereign nation and leaving it in ruins under the Taliban? The Russians at least made an orderly retreat and left behind a government. Or now over Ukraine, about two decades after laying Iraq to waste on the fraudulent claims of Saddam Hussein possessing nuclear weapons?

- Britain, that went so far as Falklands to fight with Argentina for some disputed island territory so far away and carried out that sinking of mostly defenceless and harmless old cruiser General Belgrano much in the nature of a colonial reprisal?

- Chinese Foreign Minister Wang Yi can be an honoured chief guest of sorts at the OIC summit in Islamabad and upbraid India over Kashmir. His government, meanwhile, keeps beating up on the Uyghurs, and the leading lights of OIC, especially Pakistan, whose prime minister (until he’s there) claims credit for having the UN declare an annual day against Islamophobia, don’t dare to even whisper. They are being cynical and selfish but not immoral. Because they are all acting in what they see as their supreme national interest.

Also, Gupta can be cheeky in his writing. He starts the column with a quiz-based reference to Operation Searchlight, the brutal repression that the Pakistani Army carried out in 1971, to curb the Bangladeshi nationalist movement (which resulted in hundreds of thousands of civilian lives lost) and several million refugees who fled to India.

His point: No western power came to the aid of innocent Bangladeshi civilians then.

In the end, Gupta crafts this line to conclude the piece (emphasis mine):

These are just a few of the reasons we can’t examine India’s policy on Ukraine in terms of morality. And if you do, turn that moral searchlight within.

That is known as a callback, a very cool technique used in writing and humour. 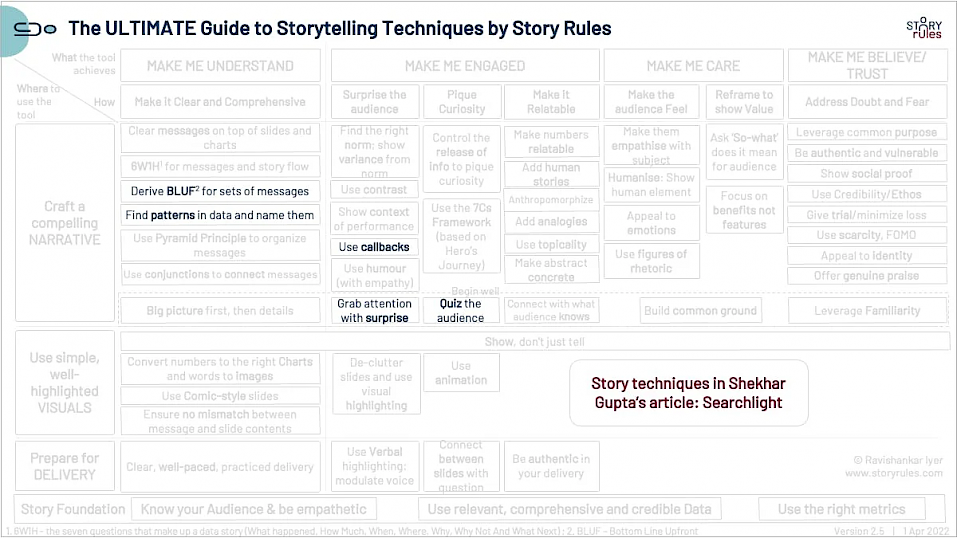