How to win in T20 cricket, especially in a tense death-overs situation?

Um, it's more complicated than that.

Bad bowls got wicketsIn a fascinating piece for ESPN CricInfo, writer Jarrod Kimber profiles three T20 games which went to the death. In each of them:

In the article Jarrod describes several vivid moments from the three games.

For example in a game featuring Punjab Kings and Rajasthan Royals last season, Punjab Kings needed 10 runs off 15 balls with eight wickets in hand. Prolific hitters Nicholas Pooran and Aiden Markram were at the crease. Slam dunk you might think. But Punjab conspired to lose the game from there.

Here's how Jarrod sums up that disaster:

If you look at the entire 15-ball stretch, there were four full tosses, three different bowlers, four batters, two balls outside the wide line, two potential back-foot no-balls, seven singles, two wickets and eight dot balls. There was some good bowling in there, but there were more than enough bad balls and wides for Kings to win the game easily.

But sometimes mad things like this happen at the death of a T20 game. It is such a different form of cricket, the most like baseball of any cricket in how close it is to the simpler binary equation of strikes and home runs. Consolidation, keeping wickets in hand, bowling normal lines and lengths - they all go out of the window.

Cut to: this years IPL. Punjab Kings were again chasing, this time against Gujarat Titans. The same pair (Pooran and Markram) at the crease. But the equation is relatively tougher: 28 runs off 18 balls. What happens?

They win with 5 balls to spare and without losing any more wickets.

Was the bowling by Gujarat Titans (Lockie Ferguson and Mohd Shami) much worse? Not at all. Here's Jarrod:

There were more good balls from Ferguson and Shami than (Rajasthan) Royals delivered in that game last season. They could have dismissed Pooran twice, and Markram struggled right until he got one off the middle.

The same two batters who couldn't manage ten from 15 with a bunch of full tosses and wides last year, needed only 13 balls to get 28 off much higher quality bowling.

Here's how Jarrod distils the implication into one para:

The death (in T20 cricket) is a scramble. It is often messy. Bad balls win games, good shots get caught, and so much is going on that we are just trying to process the results, and often forget about the process.

I loved how Jarrod Kimber juxtaposed these different matches and used the principle of contrast to make his point.

(Hat/tip: Swanand Kelkar for sharing the article on Twitter!) 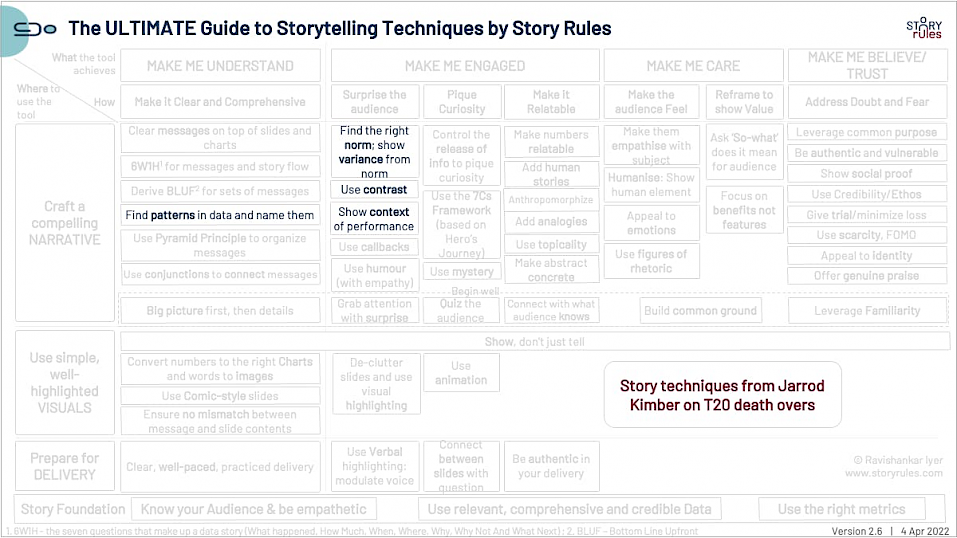