In yesterday's #SOTD, I profiled a brilliant Steve Jobs interview from 1985 (by David Sheff, in Playboy magazine of all places!)

Yesterday's storytelling theme was Steve's ability to 'spot' the story - about what extraordinary norm-breaking trend would change the world as we know it.

Today's theme: How Jobs is able to (a) discern patterns in events and (b) offer concrete examples instead of giving abstract gyaan.

In 1985, for most ordinary citizens, computers were an obscure plaything that either adorned hobbyists' homes or for serious corporate users. It was not seen as something that every household should have.

And so, the interviewer remains sceptical about the practical usage of this new tool. For a present day analogy, think of someone asking about the utility of 3D printers or the use of GPT-3 by ordinary households.

Here's an extract from the interview (emphasis mine)

David: Where do you see computers and software going in the near future?

Steve: Thus far, we’re pretty much using our computers as good servants. We ask them to do something, we ask them to do some operation like a spread sheet, we ask them to take our key strokes and make a letter out of them, and they do that pretty well. And you’ll see more and more perfection of that - computer as servant. But the next thing is going to be computer as guide or agent. And what that means is that it’s going to do more in terms of anticipating what we want and doing it for us, noticing connections and patterns in what we do, asking us if this is some sort of generic thing we’d like to do regularly, so that we’re going to have, as an example, the concept of triggers. We’re going to be able to ask our computers to monitor things for us, and when certain conditions happen, are triggered, the computers will take certain actions and inform us after the fact.

In the above response, Jobs is essentially taking a big picture view of how computing technology is shaping up and giving it a name. In fact, going beyond just a name he is also using a relatable analogy - of transitioning from being a servant to a guide.

Then David follows up with a request for an example of the above pattern.

Steve: Simple things like monitoring your stocks every hour or every day. When a stock gets beyond set limits, the computer will call my broker and electronically sell it and then let me know. Another example is that at the end of the month, the computer will go into the data base and find all the salesmen who exceeded their sales quotas by more than 20 percent and write them a personalized letter from me and send it over the electronic mail system to them, and give me a report on who it sent the letters to each month. There will be a time when our computers have maybe 100 or so of those tasks; they’re going to be much more like an agent for us. You’re going to see that start to happen a little bit in the next 12 months, but really, it’s about three years away. That’s the next breakthrough.

In this response, Jobs converts the abstract into the concrete. Instead of speaking of the product benefits in general terms, he shares vivid examples of how the product can be beneficially used by the end customer. 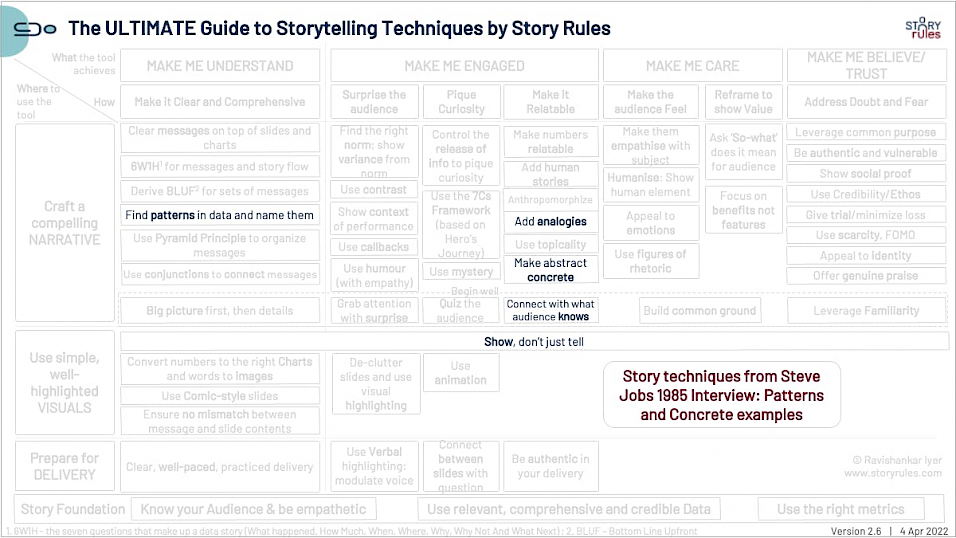