This week we are covering storytelling techniques in an article by VC investor Sajith Pai, where he profiles the work done by a startup called Smartstaff. On Monday, we'd looked at how he'd started with a human story and on Tuesday we looked at the principle of 'Show, don't just tell'.

In today's #SOTD, we are looking at two techniques: Extrapolate from one individual story to show the big picture data and use callbacks

a. Show the big picture data

Starting with a human story makes the overall narrative relatable. But ultimately investors want to see the numbers. So it is important to do the math and figure out the total market size.

Investors have a metric for this called the TAM or Total Addressable Market.

Sajith picks up a number from a report by the Indian Staffing Federation, does some basic math and comes up with a jaw-dropping insight (emphasis mine):

The below chart, from a report by Indian Staffing Federation, detailing the breakup of the Indian labour force, shows that there are as many as 388m workers in the informal labour market (this excludes those occasionally helping out in the fields). This really is the size of the labour market that Smartstaff is playing in (though a more realistic Serviceable Obtainable Market would be around 150m workers). The wages (at $1/ ₹75 per hour) for this labour force of 388m amounts to $950b annually. Very few Indian businesses can be said to have a trillion dollar TAM. Smartstaff is one. 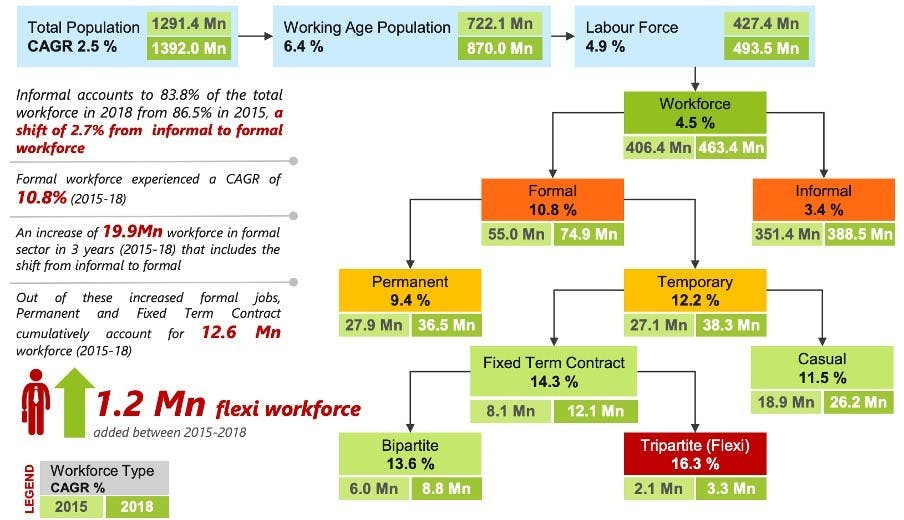 The article starts with the story of Mohd. Samim and then dives into Smartstaff's operating model. It then discusses the overall market opportunity.

But then, notice how Sajith ends the piece:

Making headway on the trillion dollar TAM dream rests on solving for the needs of one factory at a time, and this means solving for the aspirations of one worker at a time. It means Smartstaff will have to create a million Samims. The journey has begun.

This way of ending a piece is known as a 'callback' or 'referback' (since it refers back to a story element introduced earlier). It is a cool technique used by writers (and standup comedians!) to give the audience a sense of completion to the story