We often come across disparate events which seem disconnected but instead have a common theme running through them.
​
A good storyteller has the ability to find the common pattern connecting the incidents and label them.
​
I came across one such example in a newsletter by Chip Scanlan, who is a writing coach.

In a recent edition of his newsletter, Chip writes about something he calls "Bothsidesism"

CRAFT LESSON | BOTHSIDESISM
​
“I want to get both sides of the story.” That’s a line reporters often use to get a comment on an issue under debate. You’ve probably used it yourself to try to convince sources to cooperate.
​
The sentiment sounds fair, but it can lead to false balance, which gives unsupported points of view the aura of truth and equal time in news stories. Call it, as some do, “bothsidesism.”
​
The problem reflects an “ingrained journalistic habit that tries mightily to avoid any hint of reporting bias,” conservative scholar Norm Ornstein wrote in The Atlantic. “The reflexive ‘we report both sides of every story,’ even to the point that one side is given equal weight not supported by reality.”
​
WHEN TWO SIDES TAKE CENTER STAGE
​
Consider climate change.
​
Since the early 2000s, a consensus has existed in the scientific community that global warming is a human-made phenomenon, caused by burning fossil fuels.
​
Yet a minority of voices —academics, scientists, politicians and business people known as “climate contrarians”—who reject that conclusion— were featured in 49% more media articles than climate scientists between 2000–2016, according to a 2019 study in Nature Communications.
​
Considerable column inches and air time were also devoted in 2003 to those who maintained the MMR (measles, mumps and rubella) vaccine given to infants and children caused autism, even though a study in the British medical journal The Lancet reported that “almost all scientific experts rejected the claim of a link.”
​
By then, however, “most people wrongly believed that doctors and scientists” were equally divided over the vaccine’s safety. More than half of those surveyed assumed that because both sides of the debate received equal media coverage, there must be equal evidence for each,” the study found.
​
An anti-vaccine movement, which thrives in today’s Covid-19 pandemic, was born.
​
Getting both sides of a story may sound like the fair approach, but in the end, false balance, at the expense of truth, can deceive the public and is a prime factor behind the partisan divide that has split America. Bothsidesism can lead to headlines that give even more unearned credence to views with little evidence, which are then circulated widely on social media.
​
FIGHTING BACK
​
Assess the evidence presented by all sides. Checking doesn’t necessarily mean including every point of view in the story, but recognizing false balance should be a vital part of the reporting process.
​
Newsworthy examples, like the 2022 Canadian trucker “Freedom Convoy” protest against vaccine mandates must be covered, but put in context—organizers included far-right activists—and not sensationalized. If a point of view isn’t solid, resist the impulse to include it, or, as the media generally does with former President Donald J. Trump’s assertion that the 2020 election was stolen from him, identify it as unsupported by the facts."

A couple of storytelling techniques by Chip here:
- Discerning patterns across diverse events and naming them
- Supporting them through two examples - of Climate Change and the Anti-vaxxers movement (Show don't just tell) 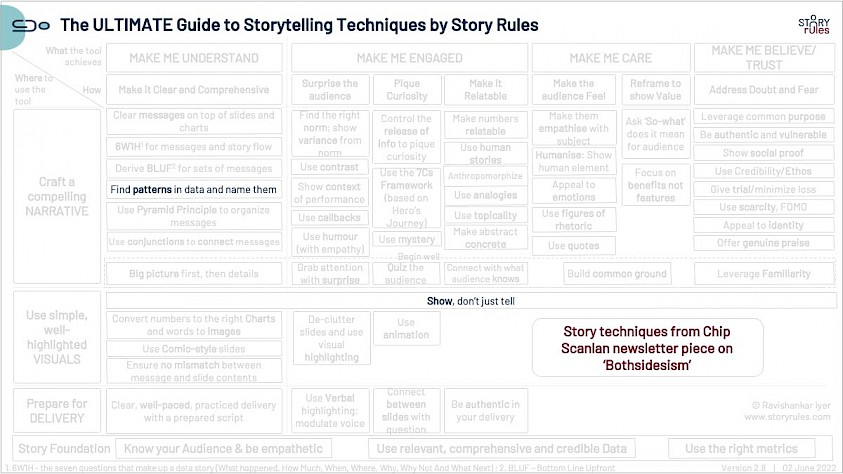