Why is Russia invading Ukraine? It is not for oil, ideology or revenge.

In a brilliant write-up, thinker Tomás Pueyo shares the reason: Russia needs to create a buffer to protect the vulnerable Moscow plain from a possible attack.

This is not a new problem - Moscow has been under threat of attack for centuries now - right from the Mongol hordes to Napoleon and then Hitler.

After the Mongol attacks ceded, the Russians have been successful in protecting their heartland. But it has taken a lot of blood and toil.

In this fascinating article (link in first comment), Tomas lays down the geographical and historical underpinnings of Russian/Soviet geostrategy. And how the threat of NATO expansion into Ukraine drives their thinking.

After reading this, you would definitely not condone Russia's actions (nothing can); but at least you'll know the thought that drives what they do.

As for Tomas's piece itself, there are many storytelling techniques used by him. I would like to focus your attention on one critical one.

The need to control the release of information.

Tomas uses as many as SIXTEEN maps of Russia in the same article. The reason? Each map is sharing one specific insight which builds on the previous one and takes the story forward.

By doing so, and by posing questions before he goes about answering them, Tomas ensures that he has the reader's attention, driven by curiosity.

And, as distant bystanders, it is useful to at least get a slightly better perspective of the Why behind the What in this crisis.

Having said that, I sure hope that the Ukrainians do not have to suffer because of great-power games and I pray for their safety. 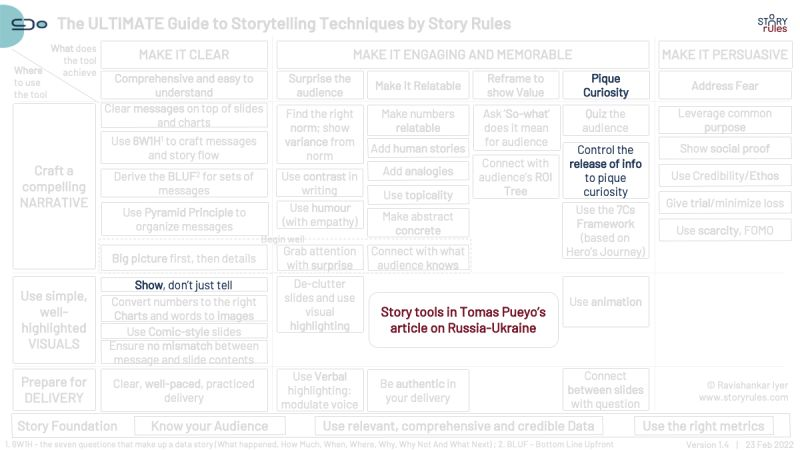