Last week, The Ken published a story about the Indian public health space which used an interesting intro.

The story, written by Maitri Porecha was about the Indian government's ambitious plans to digitise its healthcare system (through the United Health Interface or UHI) and the challenges it faces in doing so.

Now, whether or not I read The Ken's daily story, I almost always read their 200-word intro to the story.

The intro (written by someone other than the story's author) is always an engaging read - it piques your interest about the main story and yet offers you enough context to understand that sector or organisation a bit better.

This story's intro, by The Ken co-founder Seema Singh, *could* have started with this part:

But as things stand today, PM-JAY has become opaque. Its public dashboards, which gave real-time, country-wide data, have been taken down. A review of its annual budget shows the insurance scheme, which has benefited millions of families, utilised only Rs 2,681 crore of its allocated budget of Rs 6,400 crore for the year ended March 2021.

A year after Sharma took over, it’s all about UHI and the number of IDs and integrations. For all you know, something new will crop up on 15 August, which will supersede UHI."

The above two paras - which are clear and succinct cut to the heart of the problem and form the core of the intro.

But this part comes later in the email.

Instead, the intro starts with this:

It is restless (to start banner programmes); has trouble concentrating (on their execution), and acts on impulse (to move on to the next banner scheme or botch an old one)."

Why is this starting better?
- The surprising claim at the beginning immediately gets your attention ('Really, ADHD?! That sounds serious. Tell me more')
- Also it uses a clever analogy (that is from the health space - appropriate for the story!) - one that both explains the issue and piques your interest to know more.

Now, analogies can be tricky. You may disagree with this one and have your own take. Which you should.

But by taking a stance, Seema is making her point of view clearer... and enabling a dialogue.

Start strong - and consider using a surprising analogy when appropriate for your stories. 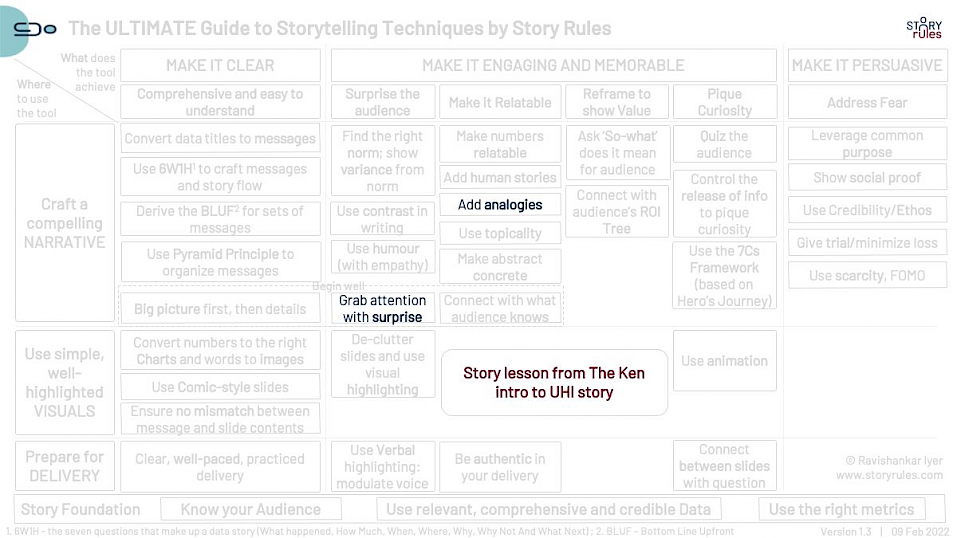 (#SOTD or Story of the Day is my initiative to highlight one storytelling technique a day in any good content published online.)