One of the most fundamental tenets of storytelling is the need for balance between two opposing elements.

If something is too familiar, it is boring and we lose interest.

If something is too novel, we are worried - is it something that won't work out for me? We have an innate fear of the unknown.

So here's a pithy line used in storytelling: "To sell the novel, make it familiar; to sell the familiar, make it novel."

To sell the novel, make it familiar:
- Rivigo is 'Uber for trucks',
- The sign for Apple email is a postage stamp
- Polygon's Matic token can be likened to Amex reward points
- To describe a new law, a CFO may use an analogy with an existing law that the audience is familiar with

To sell the familiar, make it novel:
- The detergent launched this month is called 'new and improved';
- The latest phone is 'revolutionary'
- A new Bollywood movie story is 'different' and features 'never-seen-before' action.
- Instead of just saying "our hiring TAT is 2 weeks" (which the audience may already know), we can make it 'novel' by saying "Our hiring TAT is the highest in the industry", especially if the audience did not know that.

Here's a quote by Christopher Nolan, during an interview when Dunkirk had been released:
"It’s the balance between familiarity and novelty… that as moviegoers we always look to"

The concept also works for video games. I remember a friend, Gautam Raja explain this to me once.

So that gives us a solid 50:50 split between familiarity and novelty.

And it also works for ads and short videos. During my podcast conversation with Devaiah Bopanna, we spoke about this. Devaiah was talking about the CRED ad featuring Srinath and Venkatesh Prasad as boy band singers

Devaiah: "(Our approach was) Take a celebrity (and then think) what is the most random, crazy, bizarre thing that you can do or put them in, that you've not seen them do before? But the whole idea is that you have to stick to that gag. If you're making a boy-band, it can't be a half-assed attempt; you have to actually write a song, you have to make sure that song sounds like a boy-band song, that it's written like a boy-band song, you have to take all the tropes of a boy-band while writing that song.
Ravi: "This is really important, I feel, because there's this concept in storytelling, which is that every good story is a balance between novelty and familiarity."

Many years back, I had written a post about this, which I am reposting in the first comment. 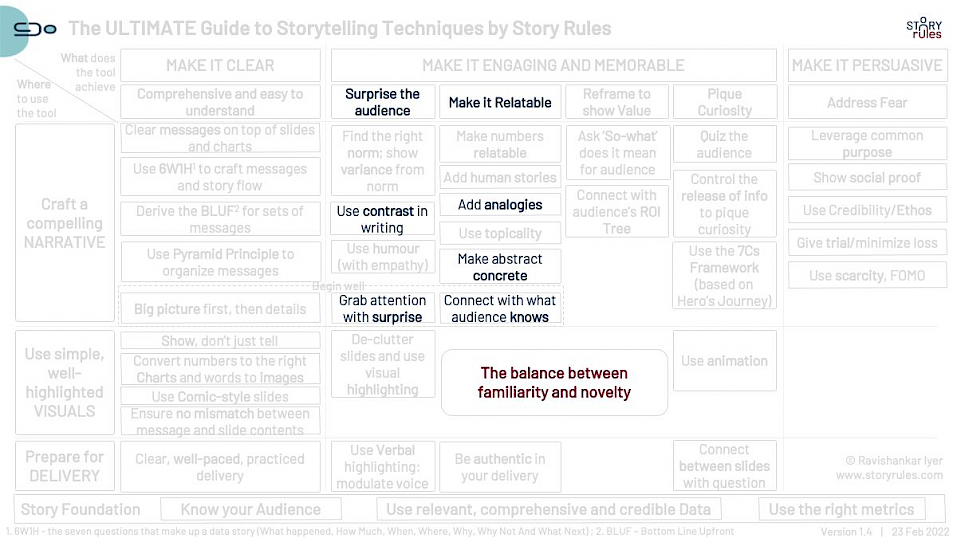