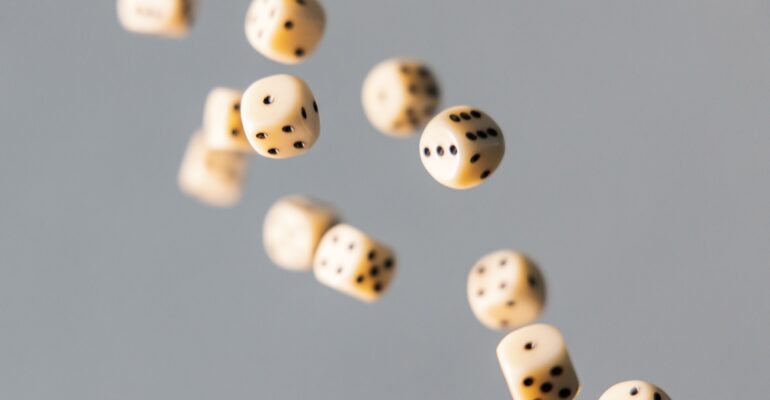 Today I’m sharing an old article that I wrote – back in early 2015, when I was figuring out what to do after leaving my job at an NGO.

​I briefly flirted with blogging, but then moved on to co-found a startup focused on history storytelling.

​During that period of blogging, I wrote something about the role of probability and how our struggle with it defines such a large part of what we do. This piece is written from the point of view of organised religion – but it applies to a lot of aspects of life.

​Look forward to your thoughts on the article!

​Our Struggle with Probability

​Whatever your views on organised religion as practiced today, you’ve got to hand it over to its inventors – it’s probably mankind’s most successful and enduring invention. How did this come to be? I believe because it solves (at least claims to) a supremely important problem that afflicts all of us.

​The Problem of Probability.

​Imagine a world where every act, every event, every effect is a direct and identifiable consequence of a previous act or event:

– You study hard for the exam throughout the term – you pass with great marks; in fact, you get the exact amount of marks, relative to your intelligence and hard work. You slack off during the term, put in some last-minute effort – for sure, you would do poorly. No such thing as luck to your rescue.

– You board a plane from Surabaya to Singapore, with your 2-year old toddler, which takes off after the necessary safety checks – you expect to land safely in 2 hours time… (The last one is particularly stunning, because – c’mon God, it was a 2-year old kid! What could she have possibly done wrong in her life?)

​But perhaps such a simplistic world, with clear cause-and-effect relationships, would have become too predictable, too boring. Or so maybe, our Great Creator would’ve thought. Perhaps She reasoned, “I should keep them on their toes a bit. Sure, reward good behaviour most of the time, but mix it up a bit. After all they need a strong reason to think of me”.

​And so, instead, our world is set up to function in a unique manner. Certainly, Newton’s third law and the principle of “as-you-sow-so-shall-you-reap” works, most of the time. But not all the time.

​There are enough instances where events just … happen. And unfortunately, many of those are of the distressing variety. Cyclones and tsunamis; droughts and pestilence; school shootings and car bombs. And of course, pandemics.

​All of this, without any apparent logic – it’s as if a random-event-generator software has been installed on the planet. Probably God Herself has just programmed it and installed it once, and then doesn’t really pay much attention to the minutiae of everyday events in every house, in every street, in every neighbourhood, in every city, in every planet, in every solar system, in every…

​So, homo sapiens evolved around 160,000 years ago (or before). And for the longest time, they survived by hunting wild animals (there were no ‘domesticated’ animals then) and gathering wild plants, roots, berries. This was the traditional ‘hunter-gatherer’ lifestyle.

​Around 12,000 years ago, something extraordinary happened that forever changed the way we live – early humans started to domesticate both, plants and animals. This was so significant that it is referred to as the ‘Neolithic Revolution’ (try and imagine it in the sense of the late 18th century Industrial Revolution or the currently underway digital revolution). The Neolithic Revolution meant people could now stay at one place, especially river valleys with fertile alluvial soil, and enjoy, for the first time in history, food surpluses. Many remarkable developments succeeded this – the first cities, architecture, writing, political organisation, technology…

​But this development did not reduce the uncertainty of life – in fact in many ways it exacerbated it. Because humans started exploiting nature so much, they became increasingly dependent on the ‘vagaries of nature’ – droughts, floods, loss of livestock to mysterious diseases, transmission of some of those mysterious diseases to humans and their children (ahem), to name a few.

​In addition, there were the vagaries of humans themselves. They frequently waged war with one another – mostly in search of more resources (land, cattle, water), sometimes in the name of honour and sometimes for reasons more flimsy than that.

​In short, despite improving standards of living, life still held a lot of uncertainty.

​And perhaps that’s when people would have started asking – “why me/us? what did we do to deserve this?”. They would’ve naturally looked to the society elders for explanations. Now, clearly this piece doesn’t aim to figure out the exact circumstances in which the practice of religion and the notions of God were formulated. But indulge my imagination a bit here.

​The society elders could have gone with 2 approaches:

​Which is how probably, each group of people came up with a set of practices and rituals to please their God/s – the need to ‘do this puja, wear this amulet, drink this potion, do namaz 5 times a day, visit Church every Sunday’ and so on.

​The first approach may seem more rational; but the second one had a crucial advantage – it gave the individual something to do.

​I remember this story that I read in Tinkle ages ago, I think on Mulla Nasruddin Hodja. Nasruddin is running really late to get to a meeting and has to take a boat across the river. He pays the boatman and urges him to row as fast as he can. The boatman is rowing his arms out, but it would still take some time, given the distance. A fidgety Nasruddin who’s seated but unable to stand it (heh), gets up and starts pacing up and down the boat. The startled boatman questions him on this strange behaviour.

​The Mulla responds “I’m running so late, you want me to sit and do nothing?!”

​So it’s that desire among all of us, to do something (even if that act doesn’t have any identifiable impact on the final outcome), to have some control over our destiny, and not just let things drift towards their course, that makes us choose option two above. And, of course, this desire has been expertly milked by a group of ‘middlemen’ who claim to know the right practices, potions and prayers to propitiate The Powerful One.

​For sure, many of these pujaris, imams, pastors and rabbis have genuinely helped their fellow human beings navigate tough times in their lives. But, as brilliantly shown in the movie PK, many of them have also unfortunately exploited their power, for unscrupulous ends.

​Here’s my take: As long as the desire to ‘do something’, is something personal and doesn’t adversely impact you or others – e.g. a small prayer every morning, a visit to the temple – it can surely be followed. But when that ‘something’ is not ‘Pareto efficient’, i.e. it makes you well off (at least tries to) at the expense of someone else (e.g. using loudspeakers, road blockages, spending scarce family money on godmen) then you better start questioning it.

​So what can be done, beyond personal prayer and propitiation? I believe 3 things:

​We may not be able to find a reason for everything in this world; but we can at least improve our odds of success and safety.

​And if you are looking for a short prayer to your favourite God, may I suggest this one, attributed to renowned American theologian, Reinhold Niebuhr:

God, grant me the courage to change the things I can,

the serenity to accept the things I cannot change,

And the wisdom to know the difference.

Photo by Riho Kroll on Unsplash

An ode to the patron Goddess of Storytelling :)

The most consequential napkin art of all time (or was it?)