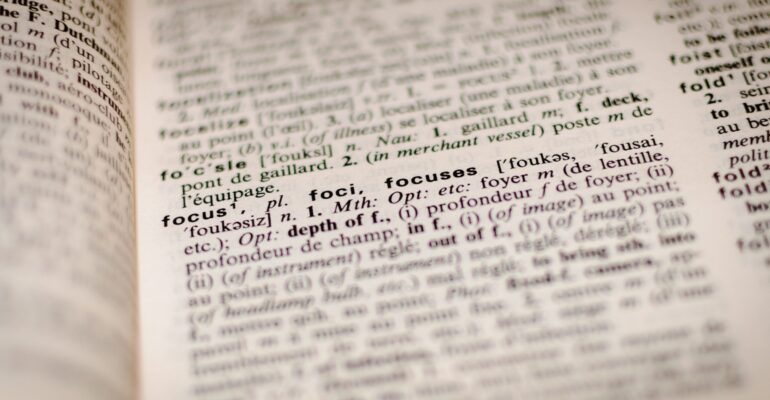 Do you sometimes sit to write an email or an appraisal note and struggle to find the right words? You aren’t alone – all of us face the writer’s block.

On the other hand, sometimes you may find yourself writing in full flow, only to discover later that the words are all over the place and not conveying the intended message.

This post will help you with that most basic task in creating a data-story: choosing the right words.

Think of a data-story as a completed house. Components such as walls, ceilings, windows, doors etc. are the messages (key statements/sections) of your story. These are made up of individual bricks, beams and frames – the words that make up your messages.

On point 1 above, don’t worry – you don’t need to read Shakespeare or Hemingway to improve your articulation (although it would help!). There are far simpler ways to write better, which we’ll discuss in this post.

Point #2 is valid, and gives rise to the adage: “Write to express, not to impress”. Tips like ‘Avoid complex words, use simple words’ make sense, since people shouldn’t have to use a dictionary to understand what you’re writing.

However, having said that, I find many people going to the other extreme – i.e. they use banal, generic words that hardly do justice to their rich, nuanced thoughts.

And ultimately isn’t that the job of words – to act as accurate, simple and elegant representatives of our (myriad, sometimes complex and muddled) thoughts and feelings?

Let’s look at four simple tips to make that happen. We will look for words which have the following characteristics:

Imagine you gifted your technophobe aunt a OnePlus 5T phone. After a couple of weeks you meet her and realise that she’s only using it for three functions – calls, music and Whatsapp (those ‘Good Morning’ forwards have gotten more intense recently). You think to yourself “Man, such a waste of that Snapdragon 835 processor with 8GB RAM…”

Guess what – you too may be significantly underusing a top-of-the-line technology you’re lucky to be endowed with: the English language.

The secret superpower that English enjoys? Lots of near-synonyms to express nuanced differences in thoughts or feelings¹. For example, take this statement from CricInfo, describing Virat Kohli “It’s also passion that defines Kohli’s emotional, effervescent and at times firecracker character.” So many nuanced, accurate words that evocatively bring out different facets of his personality.

So the next time you are describing something, please avoid banal, generic words like ‘nice’, ‘good’, ‘bad’ or ‘amazing’ . Instead use that thesaurus and look for more appropriate, accurate words that best reflects your thoughts. Here are a few before-and-after examples:

Variety is a close cousin of accuracy. Sometimes word ‘X’ may be the most accurate one for a given context, but may need to be repeated. In such cases too, the thesaurus is a great tool to identify synonyms for variety. Here are a few examples:

Thesaurus reco: I strongly recommend WordWeb, a user-friendly thesaurus with a staggering collection of words, some very smart suggestions and keyboard shortcuts to boot².

A small digression: Using CricInfo commentary as an example of accuracy and variety

I find a lot of storytelling inspiration at Cricinfo.com (yup, that’s the only reason why I spend hours on the site). For instance, think of the person providing ball-by-ball commentary. In a one-dayer, with up to 600 balls during the day, he/she can’t be writing “Hit the ball” for every shot. Just like players like Sachin and Kohli have a variety of shots in their playbook, Cricinfo commentators have a massive arsenal of words in theirs. Here’s a visual depiction of their eloquent prowess (along-with some, ahem, comparisons to showcase the quality difference):

It is incredible how they have mined the English language for all its worth and ensured that they have a wide variety of accurate options to choose from.

The below ‘Eloquence Scale’ summarises the above two tips – aim for the centre:

(For those interested, the Friends clip with Joey’s adoption letter)!

The above two tips were about choosing specific words. The next two are at a higher level – about writing style in general.

We understand tone intuitively when talking (“Don’t talk to me in that tone, young lady“; or “It’s not what you said, it’s the way you said it“). In writing however, we sometimes get the tone wrong (e.g. informal instead of formal) or inconsistent (multiple tones in the same document). Here are a few examples:

The final tip is self-explanatory: less is more. We often use more words than needed to explain something. The best way to remedy that: editing.

Our first drafts of any communication are usually sub-optimal³. It needs the process of editing, rewriting and polishing to make it sharper and clearer. Here are a few examples:

Writing – especially choosing the right words – can seem daunting to people who don’t fancy themselves as natural communicators. Hopefully these tips – aiming for Accuracy, Variety, Tone and Brevity – will help make the process easier and more effective.

Ravi Shastri: By http://www.bollywoodhungama.com/ [CC BY 3.0], via Wikimedia Commons

Shashi Tharoor: By Chatham House [CC BY 2.0], via Wikimedia Commons

The role of credibility in storytelling