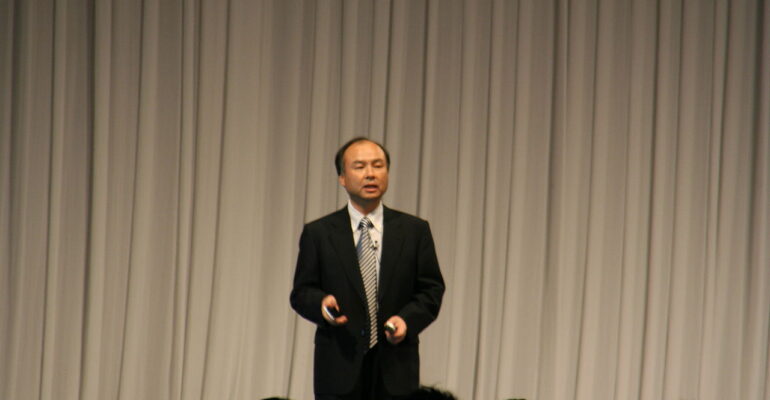 t isn’t very often that the CEO of a $100 Bn fund (who’s been called “the most powerful person in Silicon Valley“), makes a public presentation, just a month after his biggest investment has suffered an embarrassing debacle.

The stakes don’t get higher than this.

What does the iconic Masayoshi Son do? Beat around the bush and ignore the core issues? Or come up with a detailed nuts-and-bolts plan to fix the issues?

He does something in between.

This post is my attempt at deconstructing the recent SoftBank earnings deck (released on 6-Nov-2019).

Going past the initial shock…

I got to know of the deck through an IIMA Whatsapp group (one of the fastest news dissemination sources of our day).

Like many others, I was taken aback by some of the slides.

Here are 4 of them (bunched together in one image):

My first reaction: ‘Really, is this how the CEO of a $100 Bn fund presents? These slides seem like the work of a first-year MBA student!‘

I searched online for reactions and found that some news articles concurred. For instance, this one from Vice (‘These Delusional PowerPoint Slides Show How SoftBank Wants to Save WeWork‘) and this from NY Mag (‘Here Are Some Insane Slides From SoftBank’s Presentation Explaining (?) How It Will Fix WeWork‘).

But then (after a friend’s contrary reaction) I realised – I shouldn’t pass judgement without examining the entire picture. And so, I ended up watching the presentation by Mr Son himself, online.

(He’s speaking in Japanese and a voiceover is translating. Here’s a transcript I found later).

Having seen the presentation, I did see some merit in the slides being so utterly simple. (But I also found some areas of improvement).

3 things that were good

1. Start from Point A: Take the bull by the horns

For SoftBank’s investors, the over-arching concern was clear: WeWork.

And Son takes it head-on.

In storytelling, I call this ‘starting from the right Point A‘. You may have a thousand things to say – but you need to acknowledge the first/biggest question in the audience’s mind, at the beginning itself (you may answer it later – but at least acknowledge it).

In fact, this entire ‘symptoms-diagnosis-cure-outcome’ part of the deck completely simplifies, what undoubtedly must have been some complex number-crunching.

The above messages are delivered using the simplest visuals possible – such that anyone would be able to understand them*.

3. Use an analogy to combat another

Analogies are powerful tools for a business storyteller, as we have previously discussed. Great communicators make frequent use of this technique to simplify complex topics and situations.

In this deck, Son uses two analogies (interestingly, both are inadvertently related!):

i. Stormy / calm seas: In order to indicate that SoftBank is indeed facing difficult times, he likens it to being in a storm (in the first slide). He mentions that the starkly negative media coverage might give the impression of SoftBank being in a storm … and states that he “would like to take this opportunity to explain to you the situation and also the facts“.

Towards the end, he indicates that the storm is just a perception issue (“We don’t see any storm, rough orders. It’s just a soft order, to be honest.“) and they would continue along the same path (“But from my perspective, no change in the journey, no vision change, no strategy change. All we will do is to just keep going, keep moving forward.“)

I thought that it would’ve been better to acknowledge that “yes, we are facing stormy weather now, but don’t worry, we’ve got this ship under control and will soon be sailing in clear waters“.

But honestly, I don’t know enough about the business/sector to comment (read disclaimers at the end!).

ii. Sinking ship or basket of apples: The other analogy that Son employs is to combat one used by the press. The media likens WeWork to a sinking ship, which might take down the entire SoftBank fleet with it.

Son acknowledges that this may be what the external world thinks, and then counters with his own analogy – about apples!

According to Son, WeWork’s portfolio is like a basket of apples. Some are red and ready for eating (the 40% of buildings which are more than 12 months old), but most are ‘unripe green apples’ which will take some time to become ripe and edible. His point: As they ripen, WeWork’s revenue and profitability will increase.

Analogies are tricky^ – if used well they can be impactful. In this case, they seem to work to explain the simple concept of early-stage assets.

The important thing to note is that by changing the analogy (from sinking ships to a basket of apples), Son completely changes the frame of reference for the discussion. Use an analogy to beat an analogy!

Those were the good parts. What could have been better?

3 things that could have been better

1. Two separate slide decks – one for showing and one to download

There’s a saying in Hindi – ‘Haathi ke daant, khaane ke alag, dikhane ke alag‘ (An elephant has two sets of teeth – one for eating, one for showing) – which essentially means, ‘don’t go by appearances’.

I’m twisting the original meaning here – but my point is that a storyteller also needs to have two sets of presentations – one for presenting (Presentation) and one for downloading/email (SlideDoc).

I’ve explained the difference between the two in this earlier blog post (point #5).

In SoftBank’s case, the same slides that were used to present were then uploaded by them on the website. When such slides are seen without the accompanying narration, they completely lose meaning (and in this case look ridiculously simple – almost insulting the audience’s intelligence).

Also in today’s age, one needs to anticipate that a deck as important as this will be disseminated all over through social media – again without the crucial accompanying narration. Leaving it open to criticism of this sort. And this.

So what could have been done?

i. A SlideDoc: SoftBank could have uploaded a slide with some text narration (the ‘SlideDoc’ version).

ii. Disclaimer with link: Alternatively, a simple disclaimer could have been included (a bit prominently) in each slide: “This document is incomplete without reference to, and should be viewed solely in conjunction with, the verbal briefing provided by SoftBank” (I should know – as consultants, we used to include this disclaimer on every presentation!) along with a link to the video on the website.

2. More detail about the turnaround plan

Given the magnitude of the WeWork debacle, and the extent of the hit on the valuation (and reputation), I think SoftBank could have provided more details about the rescue plan.

I understand that WeWork is a private company and doesn’t need to disclose numbers (which is why the ‘Hypothetical’ tag on the slides). But given the dire context, some details (especially on cost reduction initiatives) would have added credibility to the presentation.

Perhaps there was a time when a CEO could just land up on stage and share his/her thoughts extempore. Not any more. Since decades, business leaders (especially from Silicon Valley, led by Steve Jobs) have mastered the art of the scripted, rehearsed presentation. Why? Because they believe that the occasion, the audience and their company deserved the preparation. Otherwise, they would be doing a disservice to all the hard work that was done behind-the-scenes.

You could call Son’s presentation many things – but rehearsed and prepared would not be one of them.

Admittedly, he’s speaking in Japanese while a voiceover translates into English. If we go by the transcript however, there are many places where the lack of preparation is evident. For instance:

Definitely, you’d expect better from a senior leader for such a high-stakes presentation.

Overall take: This apple is neither ripe nor unripe

Overall it’s tough to give my take on the deck. I have very little context of WeWork and other investments of SoftBank, the business numbers, valuation details et al; and so, I cannot say if this deck does a good job of answering all investor questions. (On face value, it doesn’t seem to do so though!).

In sum, can we say it’s like a half-ripe apple? Some aspects to admire, and some to avoid.

All in all, good learning no?

^ (About analogies being tricky) Incidentally, Son gets tied up in his own analogies here. In his fruit analogy, green apples are unripe (bad) and red apples are ripe (good); his slide visuals are exactly the opposite. In the slides, red stands for the ‘unripe’ assets (which are ‘in the red’), while green is used for the older ripe ones (with yellow indicating an in-between stage). He acknowledges the mismatch during his talk (“Green apples will turn. Actually, the color indicates the opposite, but apple will be in red…“) Perhaps he could’ve used another analogy – maybe, using a traffic signal analogy?

Featured Image: From Wikimedia Commons by nobihaya [CC BY 2.0]

My journey of reclaiming my life from my smartphone