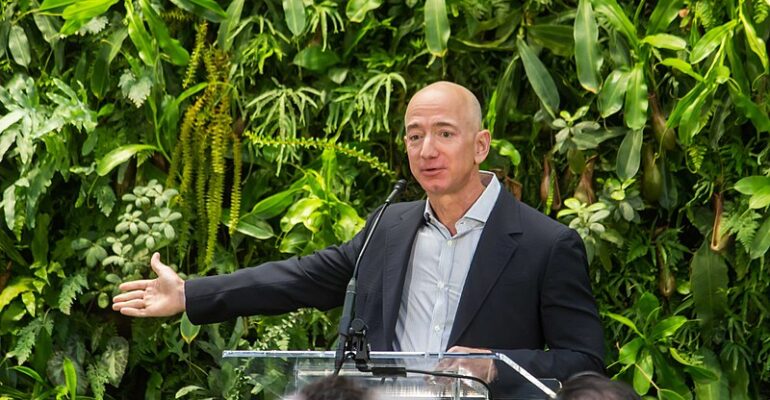 Amazon is highly respected and feted for its exemplary customer service. What drives their unprecedented success? In this fascinating annual letter to shareholders (which is also a great marketing document), Jeff Bezos details the most critical factor: their culture of high standards.

Now “high-standards” by itself is a sufficiently vague concept that can have multiple interpretations. What Bezos does is to expertly dissect it in a vivid, structured manner. And so, this letter, apart from holding invaluable business lessons, also becomes a great example of written communication.

Amazon is a famous disbeliever of PowerPoint presentations and exponent of “six-page narratives”: clearly written reports in narrative style on the topic of discussion. This shareholders’ letter itself is a prime example of a ‘six-page narrative’ (it neatly fits in 6 pages of Word, with about 4,300 words); so I was keen to study it for the storytelling lessons.

When I read the letter, I was not surprised to see that Bezos had used one of the most robust (but surprisingly less-known) communication tools to structure his thoughts: The Pyramid Principle. I have blogged earlier here and here about this technique. It is a powerful tool: deceptively simple to understand, yet stubbornly difficult to implement.

Let’s deconstruct Amazon’s letter using this approach. (Incidentally this a good exercise that you can do, to extract the gist of any piece of communication – try it out on any important presentation/speech you have read). For the Amazon letter, I am only looking at the first part of the document: from the beginning till the Leadership Principle quote (right before the section ‘Recent Milestones’). Before you read further, it’ll help to quickly read the letter.

Using the Pyramid Principle to deconstruct the letter

Let’s recap the key tenets of the principle:

When figuring out where to ‘start’ and ‘end’ your arguments in (2) above, the ‘Point A’ to ‘Point B’ principle comes in handy. In brief: When you’re writing an article or a presentation, think of it as moving the audience from their current position on a topic (say, Point A) to a new position that you want them to believe (say Point B). It would really help if you start from a place that the audience already believes or can relate to (the Point A). In this article, Bezos uses the undisputed (and publicly available) CSAT numbers as his starting Point A, and builds his way to the ultimate Point B: the need to build a high-standards culture.

And with that background, here’s my take on the deconstructed shareholders letter:

As you read it you realise the underlying clarity of thought. I also loved the relatable analogy he used – of the ‘perfect handstand’ in order to explain the concept of ‘Recognition and scope’.

To reiterate, a couple of tips on building the Pyramid:

And now for the critique: Clearer headings and anecdotes

The letter undoubtedly is a high-quality piece of communication (with the ‘clarity of angels singing’). But I would make a couple of modifications:

Sometimes concepts like the Pyramid Principle may seem theoretical for real-world situations. So, when you see one of the world’s most admired leaders using it for one of his most critical pieces of communication – you realise how robust and timeless the tool is.

For your next critical communication, I would urge you to try and apply the same. In case you get stuck, I’m happy to help!