In my recent podcast conversation with the fabulous Sajith Pai (coming soon!), he mentioned a book - 'Stop Reading the News' by Rolf Dobelli.

I liked how Rolf started his book. Not with:

Instead, Rolf starts with a personal story:

On 12 April 2013 I was invited by the Guardian to talk about my book 'The Art of Thinking Clearly', which had just been published in English. Each week an author is given the opportunity to briefly present his or her latest book to the editorial staff, and that week the honour was mine. Then editor-in-chief Alan Rusbridger gathered his staff. The room slowly filled with journalists, until roughly fifty of them were standing in front of me with their morning coffee in their hands, murmuring and waiting for Rusbridger to introduce me. My wife had come with me, and I was squeezing her hand as I tried to keep my nerves in check. These were the brightest minds at one of the world’s most prominent newspapers, and I had been given the unique privilege of sharing with them a few of my aperçus from the world of cognitive science in the hope that one of them would write about my book. After clearing his throat, Rusbridger got to his feet and said dryly, ‘I was just on your website and noticed your new article. I’d like you to speak about that, not about your new book.’

I wasn’t prepared for this. On the tip of my tongue were various practised, hopefully convincing, well-formulated observations on The Art of Thinking Clearly, which ideally would find their way unaltered into the pages of the Guardian. I swallowed them. The article Rusbridger had found on my website listed the most important arguments against consuming precisely what these internationally respected professionals spent their days producing: the news. Throwing caution to the wind, I began to talk, serving up reason after reason for why it’s best to avoid the news. Now, instead of standing in front of fifty people well disposed to me, I was confronted by fifty opponents. Caught in the crossfire of their stares, I tried to stay as calm as possible. After twenty minutes I’d reached the end of my argument, concluding with the words, ‘Let’s be honest: what you’re doing here, ladies and gentlemen, is basically entertainment.’

Silence. You could have heard a pin drop. Rusbridger narrowed his eyes, glanced around and said, ‘I’d like us to publish Mr Dobelli’s arguments. Today.’ He turned around and left the room without saying goodbye. The journalists followed him. Nobody looked at me. Nobody said so much as a word.

Four hours later there was an abridged version of my article on the Guardian website. Before long it had accrued 450 comments from readers – the maximum the website would allow. My piece, ‘News is bad for you’, was paradoxically one of the most-read newspaper articles of the year.

The book you hold in your hands is based on this controversial article.

SO many storytelling lessons in that beginning page:

PS: Here is the context for #SOTD and the 'Ultimate Guide to Storytelling Techniques' framework I use - in case you joined this series late! 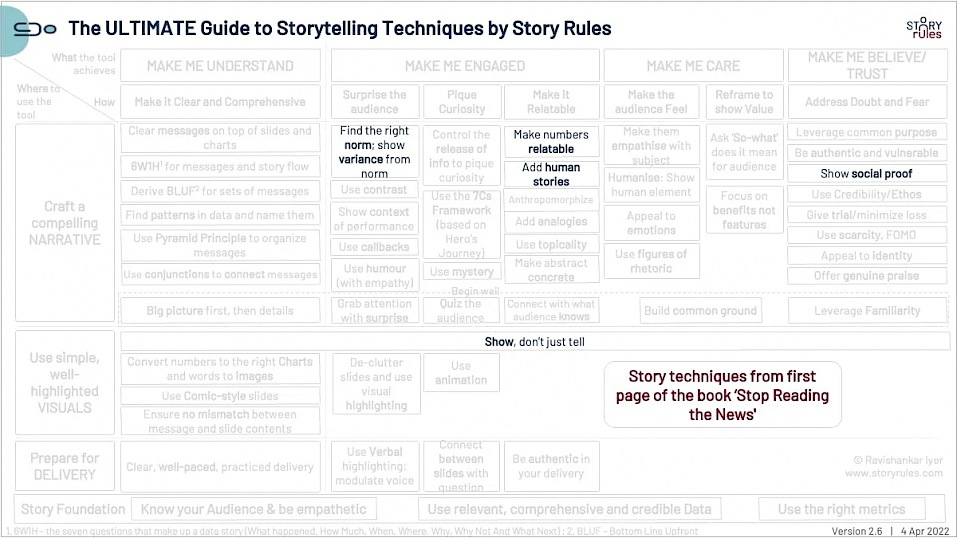