I had recently posted my podcast episode with Pramit Bhattacharya, senior Data journalist and the former 'Editor Data' at Mint. The conversation offered a bunch of smart, actionable tips we can all use when researching for and validating data.

A story about not getting swayed by populist narratives and relying on the simple power of just looking for the relevant data .

Here is a (longish) extract of that story:

Ravi: I remember you sharing a lovely story of when you realized the power of data... You talk about the story of the GM cotton seeds. Maybe you can share that story, and talk about the importance of data for policies, and for decision making in the organizational sector, overall.

Pramit: I always believed in the power of statistics. In fact, it was my one of my favourite subjects throughout, and I always believed that you could tell a better story even with very basic statistics, rather than without. Even in the market report, I used that. But I was also wary of how people abused statistics. Especially in my graduation years at IGIDR, I saw how you could manipulate it because we had this very heavy econometrics-centric course, where you ran regressions and so on, and after a point I, myself, learned how to perform simulations and see. It was an endless process and you can torture data to reveal (a lot of information).

I was a bit wary and didn’t arrive at that balance of knowing how to do it properly, ethically, so on, until much later. The GM Cotton story you mentioned was (related to) one of those factors, there are others as well. I started out with this presumption that GM cotton is responsible for farmer suicides, because that was the dominant narrative that people on the ground like some activists, some farmer-leaders, from Vidarbha in Maharashtra, were saying. My first visit was to Vidarbha.

First of all, the ground reality when I spoke to a wider cross-section, (showed that) just going from a sample point of N = 5, which was my phone conversations; to N = 35 or 40, after the one or three week long – I don’t remember the exact duration that I was there for – that itself gave me many more angles and insights, and suggested the story was much more nuanced. And that the seed is just one part of the entire farm ecosystem; there were many other factors that came into play.

When you travel and meet larger sets of people at different levels, you begin to hear more nuances in the story; certain contradictory stuff. You also begin to contextualize what you had heard earlier, in a more meaningful manner. I began to understand that the seed part of the entire farm ecosystem story was just one small part of it. There were many other factors, ranging from water, to credit, to other institutional structures such agricultural extension programs, and so on; which was getting lost in this over-arching single point narrative around Bt cotton and the seeds. There were, in fact, contradictory voices about the seeds from farmers themselves, saying that it had benefited them, at least in the early years.

Then, I came back and looked at the state-wise data, and I saw that in Maharashtra, cotton mills had gone up, post-introduction of Bt, but not dramatically. But in Gujarat, they had indeed gone up dramatically. So, my next visit was to Gujarat; the Saurashtra region, which is the cotton producing region, mainstay of farming.

Ravi: This data, was it fairly easy to get? Data on yield of cotton, pre and post the introduction of Bt cotton? Because that’s a crucial step that you took.

Pramit: Yeah, that data is a public data set. I don’t remember the exact site, but I can tell you later.

Ravi: No, the point is not about the site, but what I’m trying to say that if somebody had to test this hypothesis, all they had to do is do what you did, right? How much time would it have taken for you to get those two pieces of data for Maharashtra and Gujarat?

Pramit: Not much, frankly. It was fairly easy. I had already done some stories on agriculture, so I was familiar with the data.

Ravi: It’s interesting sometimes (how) to refute or cross-check a narrative, it’s not too difficult to get some basic data.

Pramit: Or you speak to the agricultural economists, saying, “Is this data available? Where can I find it?” and you know which year Bt was introduced, so that is public knowledge.

Ravi: Fascinating. So, you went to Gujarat.

Pramit: Yeah. I spoke to people there and I came across a completely different story. I began reading up on Gujarat so I was able to locate local seed producers, who had played a role in introducing a version of Bt cotton which was similar to Monsanto, but they had not paid any copyright, any patent fees or licensing, so it was some kind of quasi-illegal seed, but it was very popular. Even at the time when I was visiting, one could get those packets; I saw those packets in the hands of farmers. The other advantage was you didn’t have to pay in advance, unlike in Vidarbha where you had to pay upfront for the Bt seeds. Here, you paid depending on whether the crop performed or not, because the farmer would say, “Hey, these are not guaranteed.” So, if the crop fails, you don’t have to pay. If it works, you have to pay a certain amount which is much less than the others. So, a pricing power difference was there.

Beyond all that, the availability of water – both because of Narmada water coming in, and the local water harvesting efforts with various structures created over the past decade, not just because of governmental efforts but also because of non-governmental interventions; and finally, the system of extension workers was also superior, they had more people there to help in the farms. And also, credit: it was much more easily available. Gujarat has a long history of co-operative trade cultures, which is also there in parts of Maharashtra, but not in Vidarbha. You can find it in western Maharashtra and some parts of Konkan, but not much in Vidarbha. In Gujarat, there is a fairly widespread and much more superior trade network, throughout the state.

In fact, one of the things that people don’t talk about (related to) the Gujarat model, which I did, for my writing, was that it was more inclusive because of the farm story, and cotton was also a big part of it. It was not industrial growth. Pre and post Modi, you won’t find a structural break in the industrial growth, but you will find a structural break in agricultural growth. You will find some shift, and it is not just because of one person, obviously – there is a host of institutional factors, as I described, including water, history of credit culture, so on.

The final story I wrote was much more nuanced. I started with this anti-Monsanto bias, but by the time I wrote it, I ended up being biased against all the NGOs that were sprouting all these narratives about Monsanto. And as I said in the other podcast, which I should clarify here as well, this does not mean that all NGOs I’ve encountered in my reporting are like that. There are many NGOs doing good work, and many NGOs have helped me uncover the truth. But, at the same time, there are pockets; and this was one pocket where they had created a huge amount of misinformation around Bt cotton and genetically modified crops. So much so, that even the parliamentary standing committee on genetically modified crops leaned in their favor. Later, I realized that this was an international trend. I spoke to political scientists who studied these NGOs and their workings, and many of them were linked to the organic lobby, who wanted to promote their own products and denounce GM crops as somehow very harmful for your health so people wouldn’t support them and in turn, the demand for their alternatives went up. It was fascinating, but it was also a very challenging process to sift through all these claims and counter-claims, because the internet was full of all kinds of shitty stories around GM crops. In fact, I had sent a 15-point questionnaire to Monsanto, and realized later that 10-12 of those questions were absolutely meaningless. It was about some previous avatar of Monsanto that had some role in the Vietnam war, and I asked them questions about even that. Thinking back, I think they had a lot of patience with me. Initially, we got off on the wrong foot, because they wanted to influence the coverage of my piece. But later on, I came to appreciate their patience in answering a lot of stupid questions also, on my part. I think it was a combination of all that. And the NGOs initially helped me, but were not so forthcoming with answers to certain critical questions that I had later on. I think that the difference in the level of transparency also shaped my views.

Ravi: The fascinating part in this whole thing, Pramit, is that it’s a great lesson to not fall for simple narratives, howsoever appealing they may be, and it’s not easy to look really deeply but some parts of it were not too difficult either. Just ask somebody from the agricultural field, they’ll point you to some data, and that at least arms you with better questions to ask when you’re pushing into this. 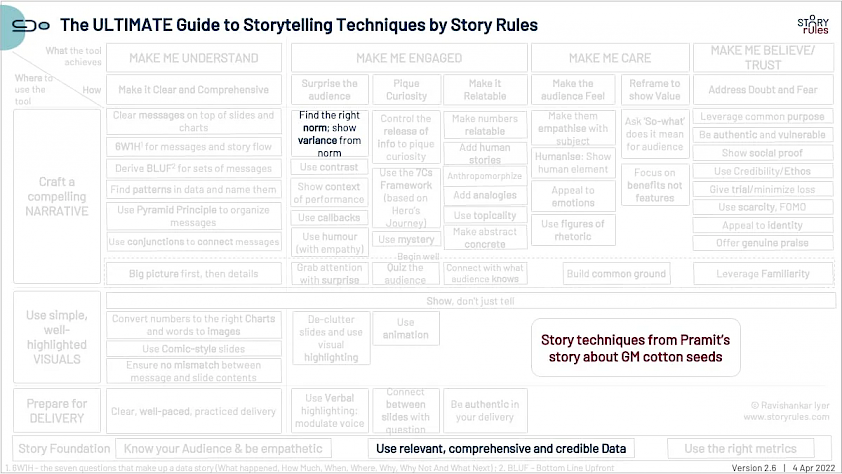