How bad would you feel if you were fined Rs. 1M?

Recovered from the shock already?

How upset would you feel?

The naughty part: Elon delayed disclosing when his stake crossed 5%... which resulted in him being able to buy the shares at a lower price.

Here's Scott Galloway writing about the potential savings in this fascinating post (emphasis mine):

Elon filed the correct form (Schedule 13D) the next day, but it requires more fulsome disclosures, which revealed he had crossed the 5% threshold on March 14. Meaning he’d been obligated to disclose his stake back on March 24. By illegally concealing his stake for 11 days, Musk was able to continue buying shares from sellers who didn’t know he was accumulating a huge position. Had he disclosed his shares properly on March 24, TWTR would have shot up 25% then, instead of on April 4, and the shares he bought subsequently would have garnered selling shareholders approximately $150 million more. That’s fraud, and while I have increasingly less confidence in the SEC, Congress has recently beefed up its power to seek disgorgement of ill-gotten gains for securities law violations.

Which brings us back to the original question: How upset should Musk feel if he has to pay a $150M fine in this situation?

Here's where Prof G puts on his number-storytelling hat. Knowing that large numbers seem meaningless to ordinary readers, he gives this analogy (emphasis mine):

Even if the SEC acts, $150 million is immaterial to Elon. On a relative basis, his entire $2.5 billion investment in Twitter is about the price of a MacBook for the average household. A $150 million fine is buying an extra charger.

Make numbers relatable to your audience. 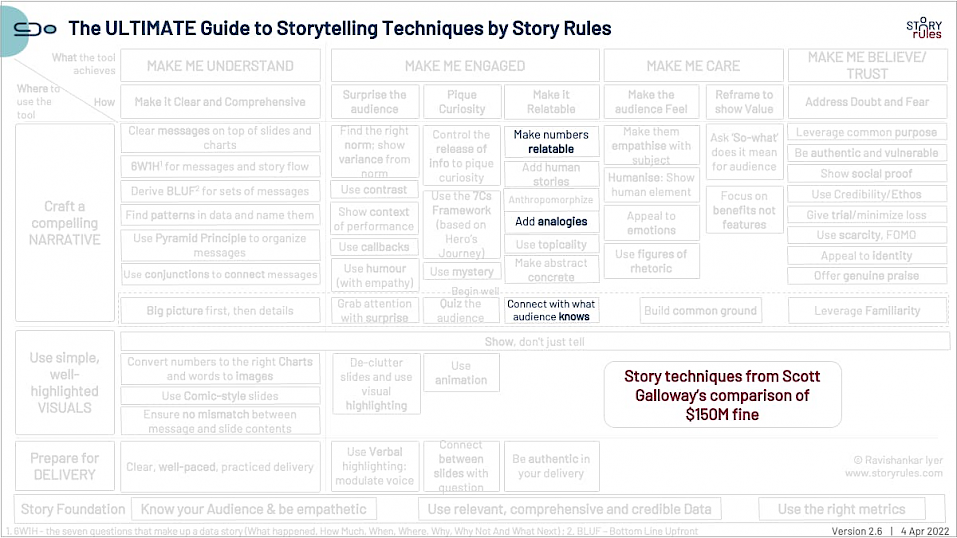