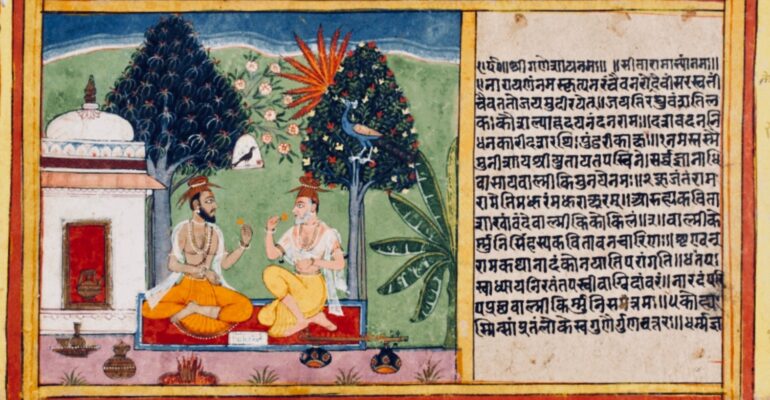 1. Make me Understand / 4. Make me Trust, Believe and Act

​I just hope that you and your loved ones are doing okay during these scary times. Stay strong, stay safe.

​Meanwhile, I thought I’ll take your mind off the pandemic with this captivating extract from an ancient story.

​The story of a fascinating conversation

Two brothers are walking in a dense forest. The setting is beautiful.

​It is spring. There’s an eye-catching lake filled with lilies and lotuses in full bloom. The lush grass shines like a gorgeous carpet. Treetops are covered with scent-laden flowers and entwined with flowering creepers. A gentle breeze blows, sending some of these flowers floating to the ground. The rustling breeze, the buzzing bees and the crooning cuckoos provide mellifluous background music to this heavenly scene…

​Alas, despite this stunning setting, the elder brother is anguished and full of laments to his younger brother…

​And Lakshmana has no words of solace for his brother Rama.

​This portion – from the 1st Sarga (section) of the Kishkinda Kanda (Book of Kishkinda) of the epic Ramayana – is the prelude to an absorbing exchange that happens soon after – between Rama and Hanuman.

​You’d think the first conversation between these two divine beings would be like one between an ardent devotee and his God… with Hanuman singing Rama’s praises and the Lord blessing him.

​It was quite different. And it has something – ok a LOT – to do with what I teach.

The Conversation – and my analysis

So Rama and Lakshmana, distraught due to the kidnapping of Sita, are walking to the land of the Monkey-King Sugreeva (since they have received intel that the vanaras can help them in their quest).

​From the treetops, Sugreeva watches the two strapping guys walking in the forest with majestic bows, quivers full of arrows and sharp swords.

​And he panics. Could these two foreigners be sent by his vile brother Vali, to finish him off?

​He plays safe and decides to send his trusted minister, Hanuman, to find out.

​The all-powerful Hanuman takes the shape of an ordinary mendicant and approaches the brothers in all humility.

​And this is what he says (each cell in the table below refers to the translation of an individual sloka – my thanks to this wonderful resource from IIT-K for the original Sanskrit slokas and their simple translation):

So what is Hanuman saying? Here’s my summary using the Pyramid Principle 🙂

Here’s my take on the storytelling techniques applied by Hanuman (sorry Valmiki) in that speech:

I thought the use of contrast was pretty cool. But there’s another technique that’s instructive.

​Hanuman does not lead with his request of friendship with Sugreeva. Does that not contradict with the principle of starting with key idea – the ‘Elevator Pitch’ – first? Especially given you are presenting to a leader?

​There’s a reason for Hanuman’s tactic of using the ‘bottom-up’ way of communicating his Pyramid of ideas. He’s just met Rama and doesn’t yet have credibility with his audience.

​By initially sharing his high-quality analysis of Rama and Lakshmana’s appearance in Vedic Sanskrit, he’s basically telling them: I’m the real deal, you can trust me.

​Once he’s built that trust, he brings out the request – of friendship with Sugreeva.

​And here’s the Pyramid Principle summary for Rama’s speech:

What techniques does Rama use here?

Rama shares the importance of being ‘balanced’ in communication. It’s quite fascinating to note he notes good communication being a balance between chest (heart), throat (tone) and head (logic). Pretty close to Ethos-Pathos-Logos of Aristotle!

Also, unlike Hanuman, Rama leads with his main instruction – “Reply in gentle and sweet words”, in the first sloka itself … instead of waiting till the end of the speech for that.

​In Rama’s case, he’s communicating with Lakshmana – someone with whom he has high Ethos. He doesn’t need to wait till the end to make his recommendation.

​When communicating, you have to keep the audience and context in mind.

This ‘advice’ – by Valmiki – is probably 2,500 years old (maybe older). Incidentally, Aristotle was writing about Ethos-Pathos-Logos and other elements of Rhetoric around that time (2300 BCE).

​I thought it would nice to learn from our ancient storytellers for a change – especially given the recent occasion of Rama Navami.

​Special thanks to my Dad for pointing out this incident from the Ramayana and sharing some great resources, including some cool analysis by Sundar Kumar.

E2: Shrehith Karkera – The Storyteller who simplifies financial news for 400K plus readers