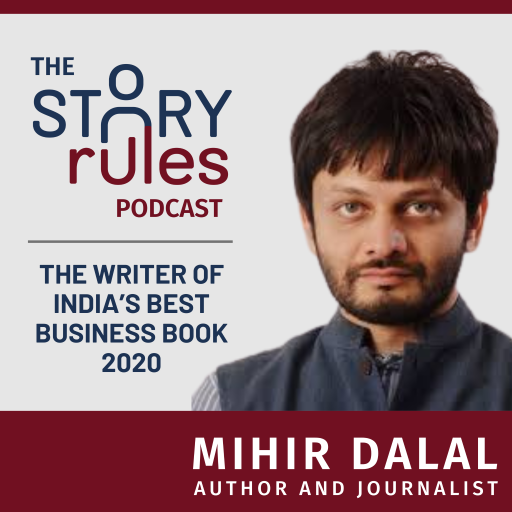 The Story of India’s most valuable startup

“So when I would start writing every day at 10:30-11 am, the first two hours would just be spent on rewriting, and editing the previous day’s work…. So it was not just once, I think I would have edited my own work at least 12-13 times” – says Mihir Dalal.​
​​
12-13 times. Gosh, that can be tiring.
​
But when you toil to this extent, the results are bound to be good. And they were.
​
​Mihir Dalal, a business journalist who’s been with Mint, Reuters and CNBC – wrote his first book ‘Big Billion Startup – The Untold Flipkart Story’ which released in late 2019. (Here’s the book on Flipkart and Amazon).
​
It was a smashing debut. The book won several awards – including the Best Business Book 2020 by Gaja Capital.​
​
The Flipkart story must not have been an easy one to tell… for one, getting information about events that happened almost a decade ago would have been challenging. Also, this difficulty would have been compounded when you factor in the multiple perspectives and the need to weave the disparate threads into a coherent narrative.
​
Mihir took on this challenge and has absolutely nailed it. The book surges forward with the pace of a thriller – one that is laced with several jaw-dropping moments.
​
If you’ve not already read it, I would suggest you do so – a lot of the points we discuss would then make sense.
​
In this conversation, Mihir talks about his early influences, his strong grounding in business journalism and how he made his key decisions on writing form and tone.
​
Book-writing is like the Test Cricket of the writing profession – a tough, brutal and thorough examination of your skills.

Now, you might be thinking – but I don’t plan to write a book anytime soon!
​
That’s ok! Even if you play only Gully Cricket or T-20 as a writer (i.e. write long emails and make presentations), you can learn a ton from Mihir’s suggestions.
​
A few things which stayed with me:

1. The concept of ‘form’ in writing and the ease of reading a narrative style writeup

2. How reading good fiction can help you write non-fiction better

3. The critical importance of editing and re-writing your work

Here are some extracts from the 3Ps – the Personal, Philosophical and the Practical – from the discussion. (All emphasis mine):

After school, Mihir had taken up Commerce and was pursuing his Chartered Accountancy. But he didn’t exactly…um, think too highly of that career:

Mihir: “In college. I studied in commerce and in commerce, It’s almost boring. So there’s not really much scope to write or anything like that and I was also pursuing Chartered Accountancy on the side. So there was really no time as such. And then I decided to drop the CA, you know, this course because again it was just mind numbingly boring.”

This naturally touched a chord, and I responded:

Ravi: “Wow, How did you manage to break that shackle? So did you have one of those 3 Idiots types conversation with your dad, that you know hey, you need to sit down and hear this?”

Mihir: “Yeah. so I had to really settle down and think about you know how I’m going to have that conversation with him. For the first two weeks, you know, when I told him that I don’t want to do CA, but I want to do Journalism, he was just completely against it because… (some) time in the 90s, he used to also write for some financial publication, and you know he told me you would never get paid“

Incidentally a very similar conversation played out at in my life… I fell for that logic and went ahead with my CA. That pathway did help me in its own way though. 🙂

Mihir on the other hand, stuck to his conviction and chose his own calling. Inspiring stuff!

Mihir: …”in the case of narrative nonfiction, the form that you have to adopt is actually partly that of fiction, which is that you tell the story, as it’s happening. So, you do not say stuff like, ‘Flipkart raised $1 billion in July 2014 at a valuation of $7 billion’, and then follow that up with an analyst quote from 2019, you know, because what you do not want, is (for) the reader to leave that world. So, any departures from that world that you’re describing, are problematic, (and) break the flow, break the readers… immersion in that world.”

I loved the concept of the reader’s immersion in a world that you are creating.

I knew that rewriting was critical – but loved the extent to which Mihir talks about its importance:

Mihir: “So when I would start writing every day at 10:30-11 am, the first, 2 hours would just be spent on rewriting, and editing the previous previous day’s work. So it was not just once… so I think I would have edited my own work at least like, 12-13 times.“

​Ravi: “To a point you would have get almost tired of that?”

Mihir: “Oh yeah you get exhausted because, I mean you know, every time you take a fresh look at what you have written you want to make changes. Yeah, so I mean on several days you know I’ve reached this point where …I would have started writing at 10.30 am and it would be five o’clock and I have just been reworking…”

Enjoy my conversation with Mihir at your favourite podcast location:

This podcast was hosted by me, Ravishankar Iyer. Audio editing by Kartik Rajan. Transcript editing by Sanket Aalegaonkar and Prahlad Viswanathan.