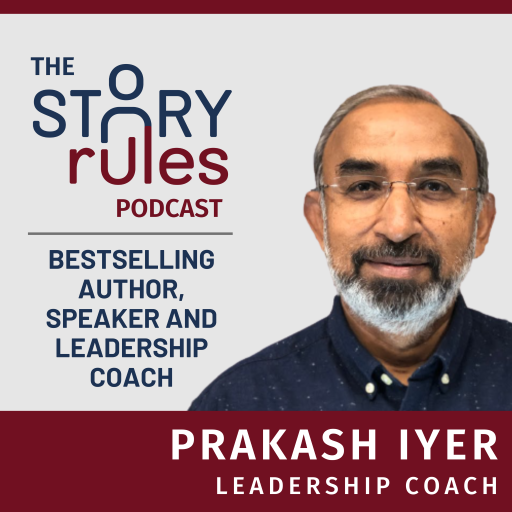 You know Deja Vu. But do you know Vuja de?

“…there is deja vu. Where you see something new but you find it familiar, and you go to a place for the first time and you say wow, doesn’t this remind me of (something)…. or you meet somebody for the first time and you say, doesn’t he look like (someone)… and this attempt to try and take the new, and, and put it in boxes which are old and familiar for us – that’s deja vu.

And … what can work for us is Vuja De which is the opposite of that. When you look at the same old thing and you say wow, never seen it before. And it’s such a powerful idea so you see a car, and you see somebody driving it and you say wow somebody’s driving a car. So if nobody was driving your car, you could have a driverless car.”

That is Prakash Iyer, an accomplished leader who wears many hats: Ex-CEO of Kimberly Clark Lever, bestselling author of several books on leadership, speaker, coach and most of all, a gifted storyteller.

Of course, in this podcast interview, I have chosen to focus on his storytelling skills.

I came to know about Prakash’s books through Ameen Haque, a leading story coach and collaborator.

Prakash’s books are like a delicious box of chocolates – filled with several short stories, anecdotes, fables and allegories – all of which offer rich life lessons.

His collection of stories come from a wide array of sources – including from his own observations of life around us.

His ability to spot the Vuja-de (i.e. to see something new in the familiar) is off-the-charts.

But, for me, what really stands out in his writing is his incredible analogical thinking. For instance, check out how he gleans several life lessons from everyday activities such as using teabags and flying kites.

Another recurring theme in his writing is the use of sports as a metaphor for life. Especially his genuine love for cricket shines through in the compelling anecdotes he shares about the game.

In this conversation, Prakash talks about the influence of his family, the importance of persistence in writing, how he kept his love of writing going even when his job was in different domains, and how he goes about thinking and writing his stories.

Here are some extracts from the 3Ps – the Personal, Philosophical and the Practical – from the discussion. (All emphasis mine):

I love stories about dads and moms passing on storytelling chops to their children. Prakash’s dad was clearly gifted on that front. I enjoyed this example about a debate competition from his school days:

Prakash: “I distinctly remember the topic of the debate: ‘The goal of education is employment’… and here I am speaking against the motion, and … dad’s helping me with that trying to prepare for this whole thing. And he gave me a very interesting way to look at it. He said, ‘you know, you are against it, but you’re not gonna say that education does not help with employment, you’re only protesting the fact that it says THE goal of education…

And then he told me that you think of it like this – in your right hand is a set of animals. Let’s call it education. On your left hand is a set of elephants – let’s call it employment. If someone says, All employment needs education, you tend to agree, because all elephants are animals. But you disagree when somebody says that THE goal of education is employment… that the only reason why education exists is employment, thereby implying that all Animals are Elephants.

And then of course you know you have 13-year old coming up on stage next day in school. And I’m not sure if people got anything else as I said in those 3-4 minutes of speaking. But in that 1 minute, when I told them about elephants and animals, you know, for the next few days I was a bit of a local hero in the school …

And that, in some senses, stayed with me to say that you can have the most powerful arguments and you can marshal great logic and thought… But what often works with other people… with teams, with an audience, is this ability to make it simple and to provide an analogy or metaphor or a story, which gets them thinking.”

What a powerful example!

Clearly, now we know where Prakash gets his legendary analogical thinking skills!

Two great points stuck with me.

First, the importance of persistence!

Prakash: “I would try and write a lot of these ‘middles’ (for sending) to The Times of India. In those days, of course, that meant you write something and then you take it out to the to the shop near the railway station where the guy sits and types stuff, and you tell them you need a double space that you read somewhere that has to be double spaced, and you put that all in (you know, my early investment in all of this was of course there … it costs money to print out for you, then posting it cost you a lot of money) and then you sent it out.

And then you waited. You waited … and a week after that, every morning, I would go grab the newspaper and look at the middle, hoping that my name would have appeared… guess what, it never did… never. I never managed to get a middle published in the Times of India.

But luckily, you know, around that time other newspapers started coming in and there’s a newspaper called The Sunday Observer, which is started by this terrific guy called Vinod Mehta. Vinod went on to edit Outlook for many many years, and 1983, India won the World Cup. And I wrote something funny about it. And Vinod Mehta and Sunday Observer published it.”

Rejection is the lot of the writer. Get used to it!

Two, despite being a talented writer, Prakash did not consider a career in the profession and instead, went the conventional route of graduation and then MBA (from IIM-A) and later took on a Sales job. This wasn’t because of any familial pressure – just typical 1980s Indian middle class conditioning.

I wondered: Did Prakash have any regrets about this? Would a creative, writer types enjoy a hardcore sales role roaming about in the heat and dust of India?

But what about that love for writing? Well, here Prakash shared a beautiful little tidbit from his working days which blew me away.

Prakash: “You know, the fact that I enjoyed writing stayed with me and I started selling soaps very early in my career and for me writing the monthly report was great fun because that was the only writing that I did around that time … but to talk about what happened when I was in Chikmagalur at that retailer or what is Procter and Gamble doing suddenly in the market… this became an interesting thing for me to talk about. But the point I’d make is, let that stay with you, it never goes away, and hopefully, someday you’ll get a chance to do more with it”

Ravi: “Such a lovely insight Prakash… because most people – I think 99 of 100 folks from HUL at that time – would be dreading writing that report … and yet here’s this one guy who’s writing it so well that the senior who’s reviewing it is actually enjoying reading it. I think that’s great and it’s also like a great message that pick whatever you get – you might just get that one chance to write in a month but use that and make it work.”

Prakash: “I guess in some ways, it doesn’t go anywhere, it may not become your vocation, but it stays with you and it’s not a bad idea to try and keep at it“.

Towards the end of the conversation, I asked Prakash if he’d like to add anything. So glad that I did – he beautifully summarised his approach in the following words:

Prakash: “So I tend to say “hm that’s interesting” quite often, in the sense that I find ordinary things and say wow, that’s nice. And maybe if you’re looking for storytelling in three steps, maybe I’d \ say that’s the first one which is to say, “Hm, that’s interesting”, quite often, so you’ll suddenly find lots of things that are interesting … That’s the first one and second one I think is don’t trust your memory. Try and write it down, put it down somewhere. And the third one – don’t just leave it there as writing because then you’ve got lots of stuff written down somewhere and never used it. Try and use it as quickly as you can; try and share it, simply try and tell someone that you know what, I was lucky, I read something interesting today, I want to share it with you. And may be just do that and you’ll be on your way”

You will surely be on your way.

Finally, four things that stayed with me from the conversation:

1. The concept of Vuja De – how you can find extraordinary insights in ordinary things

2. How to build powerful, evocative analogies

3. The importance of branding concepts (for instance – PhD for Passion Hunger, Discipline) to make them easier to stick

4. The use of conversational, simple writing to make it easy and engaging for the reader

Enjoy my conversation with Prakash at your favourite podcast location:

This podcast was hosted by me, Ravishankar Iyer. Transcript editing by Sanket Aalegaonkar and Prahlad Viswanathan. Audio editing by Kartik Rajan.