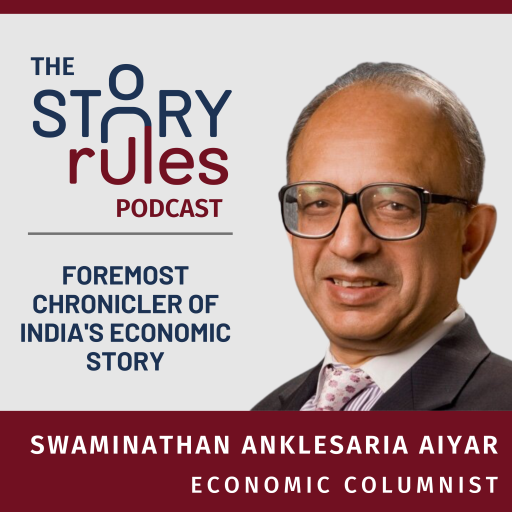 A pinch-me-am-I-awake kind of guest

Growing up in Mumbai, the Times of India was a daily habit at our household. When I got my hands on the newspaper, here’s what I would unfailingly do:

– I’d look for ‘interesting pictures’ in Bombay Times (I mean, let’s be honest, I was in my mid-teens)

– I’d then ignore the rest of the front page and head straight to the sports pages.

– And in the Sunday Times of India, I would head to the edit page and first read the ‘Swaminomics’ column by Swaminathan Anklesaria Aiyar​

Today, I’m not exactly a big fan of the Times group (look at what they’ve done to Bombay Times). But I still like the Sunday Times of India, especially that edit page and especially Swaminomics.

Since my early teens I have marvelled at Swami’s ability to demystify complex economic and political news and distil the key essence for the lay reader. He would take contrarian perspectives and back them with solid data and clear analysis. You might disagree with his opinion, but you couldn’t ignore it.

Swami is a legend, a doyen of economic journalism in India.

And so, it seemed like a moonshot – what if I could interview THE Swaminathan Anklesaria Aiyar for this podcast?

After a few emails and some help from his daughter Pallavi (who I knew from earlier) I was thrilled when he agreed to come on this podcast!

In this conversation, Swami narrates key milestones from his 56-year writing journey … (That’s right, 56 years – he’s been professionally writing for 14 more years than I’ve been on this planet).

In the conversation, he shares his research sources, how he records his ideas, his contrarian approach, and the focus on lucid writing.

As always, I’m sharing some some lightly-edited extracts from the conversation – tagged under ‘the 3Ps’ – the Personal, Philosophical and the Practical (all emphasis mine):

Compared to my other conversations, in this one, I didn’t get into details of Swami’s growing up years and early influences.

But he does talk about a couple of major influences on his writing style.

a. The influence of The Economist

Ravi: “One of the things that I really admire (is your use of) layperson words. You hardly use any technical words… was that a style that you always had, even while growing up or you developed over time?

Swami: “Actually, it was, when I first started writing for the Economist. This was one of the things they stress in the stylebook. For instance, I wrote about petrochemical, they would knock it down to chemical. Because this is just the main chemical, the fact that it comes in petroleum is a minor issue. So, that was an indication of – Avoid jargon.”

b. The ‘prick with a needle, don’t bludgeon on the head approach’

Ravi: “One more point about your writing… there are strong perspectives, you’re not afraid to be unequivocal about something. So (here’s a) quote from one of your articles, on the farm protests, where you conclude the article with: ‘So, the farm agitation supports a terrible farming system that kills aquifers, maims neighbours through stubble burning, and now kills them by spreading Covid. Those failing to condemn this are hypocrites or cowards’ – That’s strong language!”

Swami: “Actually, I try to avoid bludgeoning people… This was one thing that Ram Nath Goenka of Indian Express told me back in the 60s. He said the best writing is not hitting somebody on the head because… you have to prick their bubble. That is the way you do it. Of course, he was sufficiently hypocritical that he himself would hire Arun Shourie and others to bang on other people… so he was not against banging people on the head at all … But it was an important insight to me that if you want to make a point, very often it’s made much better, doing it in other words. One of the things that I often employ is I will write an open letter to Modi. Or, instead of saying that all this is wrong, you write in the form of a letter. It’s a different way of putting the same thing. And you can prick this guy… So the same points are made and it arouses less antagonism.“

a. Having a contrarian point of view is critical to Swami’s writing philosophy.

Ravi: “Almost every article of yours has this contrarian thinking so, is this something that you look for, that when you’re reading something, what is it that I find different or wrong about this?”

Swami: “Oh, that’s all important. Why should, I mean, if I’m writing what everybody else is writing, I can never become the name that stands out, right? So instead of being a brand, I will become a generic soap… So when I am reading, it strikes me again and again and again, that there is some key issue which is being avoided or that, there are some simple assumptions which are in fact misconceived. So, whenever I see that … in what I’m reading something is getting missed out. I love to focus on that. Now, it is not always the case that people leave things out. It is not always possible to be contrarian. A whole lot of issues … I’m with what other people are saying, except that I do try to find a new angle that others have not. So as I said, the final, the best journalist is, you have to think of an angle that even Euclid would admire.“

I loved that last line!

b. But, that point of view should also be defensible

Swami: “Google has revolutionized everything. It is now possible that (for) every single sentence we can say, “is this really true, is this really true”, and so you can go back and Google and check. And because of that, there have been several occasions when I have abandoned the column. (I tell myself that) this is not sustainable. That you know, when I do the research, I find that argument cannot be sustained because various things I have left out. And once you bring those in, the thesis will fall. So there are times when I said the importance of researching is not just for the facts but sometimes, to realise that, sorry the column is wrong.”

Often, we fall in love with our narratives and actively look for evidence that confirms it (the confirmation bias). Swami’s intellectual honesty ensures he doesn’t fall into that trap. Plus, by having a long list of topics to write about, if one of them doesn’t work out, he can move on to the next one.

c. And finally, the reader doesn’t owe you her attention:

Swami: “You have to woo the reader. You have to persuade the person, first of all to read what you have written. If you have failed there, then you’ve already failed. It doesn’t matter what are the gems of wisdom that follow. So the notion that you have to woo your reader was important. I used to write funny pieces. They used to have something called a ‘middle’ column in the Times of India back in the 1950-1960s. So I used to write small funny, witty pieces… because writing funny pieces is entirely about wooing the reader.“

a. Writing is rewriting

Here’s Swami on his editing process:

Swami: “So very often when I write, I produce my first draft (of) 1000-1200 words, then you chop, chop, chop (to get it to 800 words). And this particular process helps you focus, focus, focus, every time you do a re-read, you say, “Aha, I can do without this, I can do without this”. So the entire issue becomes on ‘how much can you exclude’. And this is something that helps enormously in sharpening focus, sharpening the language. As a journalist, we received articles from lots of people of 1600 words. And we have to chop it down to 1200. It’s normally quite easy. But whenever I write for my staff their complaint is that it’s almost impossible to chop it down. I’ve done so much chopping down myself. That there is not very much more, you can’t get rid of the fat without the meat getting impacted.”

b. Recording ideas: Swami has a simple process for recording his story ideas

Swami: “…the moment I read, whatever I read, if I have an idea that comes, I immediately send an email to myself. I just write ‘Swa-idea-this’, and then ‘Swa-idea-that’ and I put down… So I have a long list of Swami ideas. More than 50-60 accumulated over time. So when the time comes to commit that my column, I just look at that list.”

And that was Swaminathan Anklesaria Aiyar, one of the foremost chroniclers of the India economic story.

A few things which stayed with me:

1. Have the courage to state contrarian views

2. But don’t fall in love with your ideas – if the data doesn’t support, be prepared to ditch them

3. Edit, edit, edit – Every word needs to earn its place.

4. Woo the reader – they don’t owe you their attention

You can enjoy my conversation with Swami at your favourite podcast location:

If you find this content valuable, please rate and review this podcast on iTunes, Spotify, Google Podcasts, or wherever you listen to them (links above). It’ll help others like you discover these insights!

This podcast episode was hosted by me, transcript editing by Sanket Aalegaonkar and audio editing by Kartik Rajan.

The funniest book on endangered species