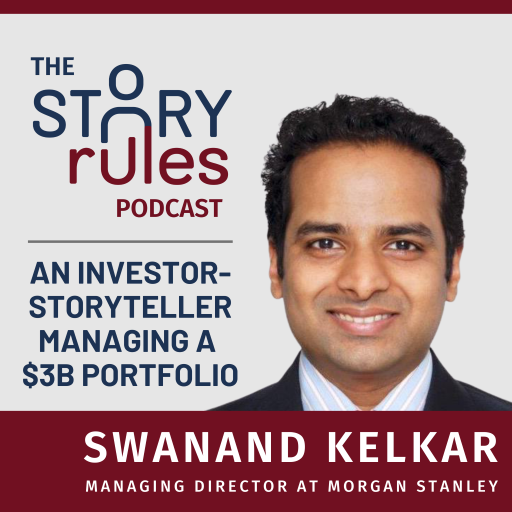 “A lot of people on the equity research side … write a lot about markets and investing. But there is not much (at least maybe 8-10 years ago), written from the practitioner (investor) standpoint. And so once I provocatively said that people listened to Harsha Bhogle about batting because Sachin can’t talk…. But I would rather listen for practitioners, right? Even if it’s small, even if it’s like two pages, three pages, five, whatever. I wanted the practitioner’s insight. So I would rate, maybe three pages written by Buffett over 300 pages written by a sell side analyst. So that is where it (my writing) started.”

That is Swanand Kelkar, until very recently a Managing Director at Morgan Stanley India (he’s recently moved out of that role).

(Incidentally he – and I – are big fans of both Harsha Bhogle and Sachin T – no offence meant to anyone!)

At Morgan Stanley, Swanand used to advise investments in funds with around 3-4 Billion dollars… (now you know who to go for stock tips).

Now if you’re not familiar with the world of high-finance or ‘markets’ (stocks, bonds, commodities etc.), there is a broad two-way division in roles: The Buy-Side and the Sell-Side.

When companies need capital they access the equity or credit markets. The investors/ guys with the money are known as the ‘buy-side’.

The advisors who match the investors with the companies are known as the ‘sell-side’.

Most people work on the sell-side. They essentially analyse investment opportunities (typically in listed equities and bonds) and craft reports to present to investors. Typically, their reports would have a final investment recommendation (which is what they are ‘selling’) on the stock: Buy, Sell, Hold etc. (Even buy-side firms have people who do this role)

Now, the investors (to whom the reports are presented) make up the ‘buy-side’. These are the folks who read all the reports and take the final investment decision. They sign the cheques.

Here’s Swanand on the difference between the two roles of analysis and actual investing:

“So I was kind of an analyst working with numbers, meeting companies, doing corporate calls, making Excel spreadsheets, models… So that grounding is very important. But it’s only in 2011-12 that I actually started managing money in the sense, I started making the decisions, of where to put the money, how much to put, etc. And it’s a whole different ballgame than being an analyst… And so if you’re an analyst, you just say, okay, on a spreadsheet, this looks okay, whatever. And this is my recommendation, buy, sell, hold, don’t sell whatever. But when you’re actually actually putting money out, I mean, it takes a different dimension altogether. It’s like, it’s like playing cricket in simulation, versus actually facing James Anderson.”

I loved that cricketing analogy (of which there are plenty in this podcast conversation)!

Now, in the investment world, the ‘storytellers’ are usually the sell-side guys – because they are always writing reports, pitches, presentations. The buy-side folks don’t write as much – at least for external consumption.

Swanand is one of those rare investors who also writes.

The Buy-side Storyteller who re-emerged

So, growing up, Swanand was a keen reader and writer. Having written a few school journal articles and gotten great marks in English in the 10th standard board exams, he proclaimed to his parents: “I want to become a journalist”.

Understandably, his middle-class parents dissuaded him saying something to the effect of “have you seen any journalist make money?!”

They suggested another option instead: Engineering. (I know, radical!)

Now, Swanand was convinced by his parents’ logic of not taking up Journalism (it was easier to convince teenagers in those days)….But he was NOT ok just toeing his parents’ line and taking up Engineering. He wanted to be free, to choose what he really wanted, to make his own destiny…

And so he chose Commerce and became a CA.

Anyway, you might think that Commerce was a terrible compromise for both.

But it turned out to be a great one for the world of investing – and storytelling.

That writer in Swanand stayed hidden through all those years of Accounting lessons and Balance sheet analyses… and re-emerged when he started investing in 2011.

And boy, did it emerge brilliantly.

Apart from his own work, Swanand started writing for Mint… In fact that’s where his writing caught my eye.

For instance consider this article he wrote on how younger Indians are much more comfortable taking on debt:

It is a masterclass on data-storytelling. It starts with a hook, has a strong premise, builds the argument with MECE data points, has a clear flow, simple visuals, a memorable ending… it’s basically perfect.

You can read more of his writing (including the unique ‘sabbatical series’) here: https://www.livemint.com/Search/Link/Author/Swanand-Kelkar​

In the episode, I speak to Swanand about his techniques to consume curated information, his reflection methodology and his writing process.

I especially found two things to be very impressive

Here are some extracts from the 3Ps – the Personal, Philosophical and the Practical:

Swanand talks about the power of reading well:

“I really picked up writing in eighth-ninth standard. I mean, I used to write before, but it was like, very basic, rudimentary kind of stuff. But what I realized that I started writing better, the minute I started reading more and reading better … So that was one of the things which I felt is true even today. The more you read, the better you read, the better you write”

He talks about how his father (who looks to be a gifted storyteller himself) would tell him stories when he was young:

“(My dad) used to tell me the Sita Haran story, which is Rama, Sita and Lakshman are in exile and Sita sees a golden deer and sends Ram in pursuit. Everybody knows that story, right? But what he used to do differently every time is that he used to change the setting of the chase where Rama is chasing the deer. In the original story, it happens in a forest. But let’s say that day, we have seen Deewar movie right, which is the Amitabh Bachhan’s movie that changes to then happen on the docks of Bombay. So he’s used that setting in the same story.”

Here’s how I interpreted that incident:

“(Your dad) was actually using a very powerful storytelling technique, which is that … we all want a balance of novelty and familiarity, in our stories, in our products, in life. So if it is too boring, too familiar, we get bored “Areh, naya kya hai issme” (what’s new in this)… , but if it is too new, then fear sets in. So there is, you know, fear of something completely new. So you need to have that balance. And you know, there’s this line I remember Chris Nolan, saying in an interview that, it’s that balance between novelty and familiarity. That’s where the golden mean is…“

Swanand says, we must write for the median audience, not for the 5% detail-nuts who might be looking to derail your flow with irrelevant questions:

Swanand: “…for instance, you have a chart which shows your household debt to GDP is going up. You are convinced on this first level of data. But if then somebody asked me, you know, ‘but at a net level, it might not be going up’ or ‘at a gross level it might not be going up’ or something of that sort. You need to have that data in appendix that is have it handy somewhere. But don’t clutter the main thing with all those protestations or all those ‘Objection Mi-Lords’, which you have heard in your own head. It’s okay. You can have the data somewhere you have thought about it…”

Ravi: “Just because one guy in a meeting of five people might be that detail-oriented guy who is going to derail everything with that random question. Don’t make the story for him..”

Swanand: “Ya, so don’t play your next inning for the troll in the last Twitter post, right. So somebody told you, Hey, you got out playing an outside edge, and then you go like, I’m gonna get out whichever way I want, but I won’t get an outside edge. Right. So you’re basically trying to prove it to that one guy, among 5000 … So I think, we should make the presentation or the writing for the median audience, right? There will be one detail nut out there who’s gonna ask you something. Sure, think about it, keep it in your back pocket. But if you just put it in the main slide deck, what it does is it makes the whole thing very clunky, it just takes the attention away from a clean, simple, elegant message…”

I asked Swanand how he starts writing a work related story. Here’s his technique:

“So let’s say I’m writing a nonfiction piece. What I do is what I call a ‘thought puke’ on paper… I know it’s not a great imagery. But you take a plain sheet of paper, and you write down everything you know about that subject or even if you don’t know about that subject on that piece of paper. Not all of it will be relevant to your eventual writing, you will glean out a lot of it…. But it will be the start of creating a structure to how you’re writing.”

Simple idea right – don’t worry about structure, flow etc. initially. Just ‘dump’ all your thoughts on paper first and then start working with those.

Also, you can’t go wrong this suggestion of his:

“So I give most of my pieces to my wife at the draft stage. She’s a chartered accountant, but she’s not connected to the markets in any way or to the economy. And I have to ask for her feedback. So say which are the lines which are grating which are kind of clunky, where did you lose your attention by the end of the sentence? What is it that is very dense, which is not very clearly explained to you, because you and I assume things to be common knowledge, right, that everybody knows what CIBIL has done. So maybe for CIBIL I’ve just written one sentence, but she’s like ‘Who’s CIBIL’, I said not ‘Who’s CIBIL’…I said ‘what CIBIL?’”

Overall, the conversation has a ton of great insights from a down-to-earth, relatable guy, who just happens to be investing in billion-dollar portfolios.

More than anything else, what stayed with me was the vivid visual of his father telling him the Ramayana story with all that added drama!

Enjoy my conversation with Swanand at your favourite podcast location:

Note: This episode was recorded when Swanand was still at Morgan Stanley – so you’ll hear references to his ex-employer in the conversation.